A divided US House passes immigration bills, including pathway for 'Dreamers' 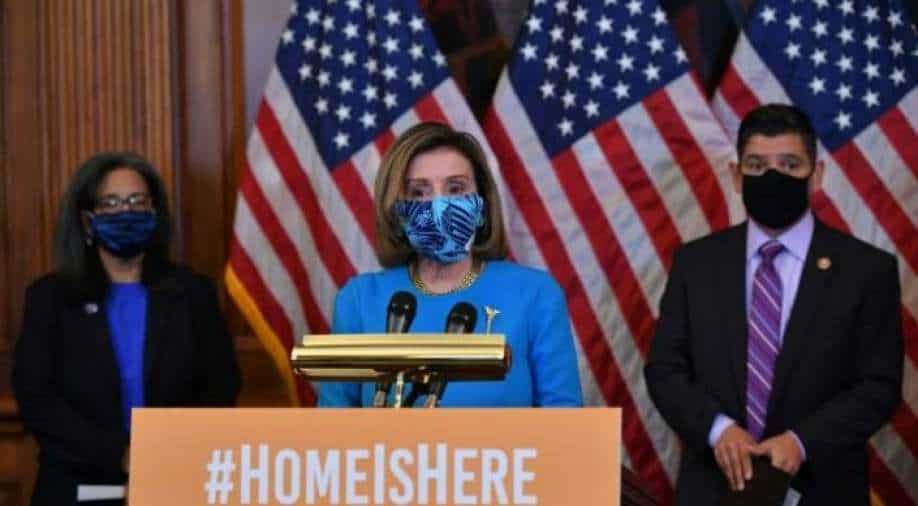 The House on Thursday voted to open a gateway to citizenship for young Dreamers and immigrants who have fled war or natural disasters abroad, giving Democrats a win in the year's first vote on an issue.

The US House of Representatives has passed two immigration bills that would provide legal status for millions of undocumented immigrants.

The House on Thursday voted to open a gateway to citizenship for young Dreamers and immigrants who have fled war or natural disasters abroad, giving Democrats a win in the year's first vote on an issue.

US lawmakers on Thursday approved one bill offering legal status to around two million Dreamers, brought to the US illegally as children, and hundreds of thousands of other migrants from a dozen troubled countries on a 228-197 vote.

The other formalises the legal status of migrant farmworkers -- who the White House notes are "living in the shadows and vulnerable to exploitation" -- and offers them an opportunity to earn citizenship.

The Farm Workforce Modernization Act would permit farmworkers and their families to remain in the country, and in many cases become US citizens, through continued employment in agriculture.

It passed by 247 to 174, an even stronger bipartisan margin.

Democrats said their bills were aimed not at border security but at addressing groups of immigrants who deserve to be helped.

White House press secretary Jen Psaki told reporters that Biden supports both bills as "critical milestones toward much needed relief for the millions of individuals who call the United States home."

The Dreamer bill would grant conditional legal status for 10 years to many immigrants up to age 18 who were brought into the US illegally before this year. They would have to graduate from high school or have equivalent educational credentials, not have serious criminal records and meet other conditions.

To attain legal permanent residence, often called a green card, they'd have to obtain a higher education degree, serve in the military or be employed for at least three years. Like all others with green cards, they could then apply for citizenship after five years.

The measure would also grant green cards to an estimated 400,000 immigrants with temporary protected status, which allows temporary residence to people who have fled violence or natural disasters in a dozen countries.

The other bill would let immigrant farm workers who've worked in the country illegally over the past two years -- along their spouses and children -- get certified agriculture worker status. That would let them remain in the US for renewable 5 1/2-year periods.

The legislation's success in the Senate, which is comprised of 50 Democrats and 50 Republicans, is in question.

Any immigration bill would need the support of at least 10 Republicans to overcome minority blocking tactics.

Striking a Senate deal on the complex issue looked unlikely, for now, especially with waves of undocumented immigrants including children arriving at the US-Mexico border.

Republicans have warned that Biden's border policies will only worsen the flow of illegal immigration.

Biden has suspended work on Trump's wall along the Mexican border, ended his separation of young children from migrant families and allowed apprehended minors to stay in the US as officials decide if they can legally remain. He has also turned away most single adults and families.