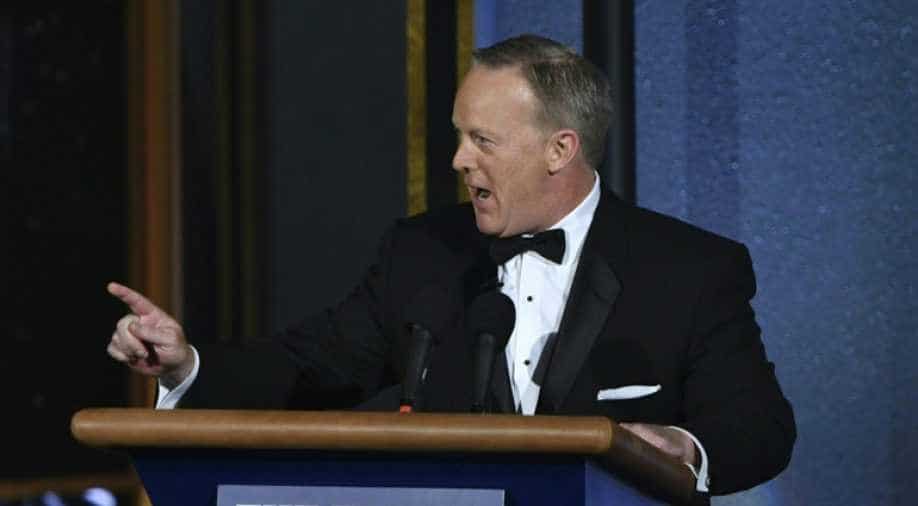 Spicer's remarks were a reference to his jaw-dropping assertion at the very start of his tenure that Trump's inauguration was the most attended ever, pressing the president's claims despite photographic evidence to the contrary. Photograph:( AFP )

Former White House press secretary made a surprise appearance at the Emmys.

When host Stephen Colbert asked how many people were watching the Emmys, Spicer slid on to the stage behind a White House-style podium and declared: "This will be the large audience to witness an Emmys, period. Both in person and around the world."

Spicer's comments were a reference to his and US President Donald Trump's assertion that the turnout for his inauguration was the largest ever in US history -- despite photographic evidence to the contrary.

With some commentators saying he was the highlight of stand-up comic Colbert's opening monologue.

Alec Baldwin, who won for best-supporting actor in a comedy series for his impersonation of Trump on Saturday Night Live, seemed to think so.

AFP reported Baldwin as praising Spicer for having the good grace to turn up.

"I've done some jobs or things that you shouldn't admire or respect," AFP reported Baldwin as saying. "He and I have that in common."

Remember of course that Spicer too was pillioried on SNL.

His character was played by the actress Melissa McCarthy, who most memorably rammed a White House podium -- on the show -- into a pack of reporters as she tried to shout them down.

McCarthy herself won a Creative Arts statuette for her "Unhinged Spicey" impersonation of Spicer.