42 killed in Yemen suicide attacks claimed by IS 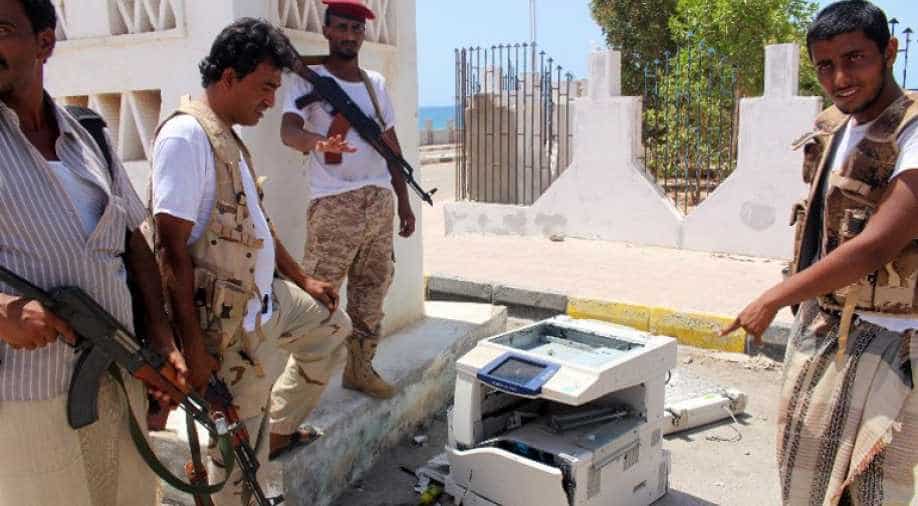 In all, the attacks killed 40 soldiers as well as a woman and child who were passing by and wounded 37 other people. Photograph:( AFP )

Follow Us
A wave of suicide bombings targeting Yemeni troops killed at least 42 people on Monday in the southeastern city of Mukalla, officials said, in attacks claimed by the Islamic State group.

The capital of Hadramawt province, Mukalla had been under the control of Al-Qaeda for one year until pro-government troops backed by a Saudi-led coalition recaptured the city in April.

But IS claimed responsibility for the attacks, saying in a statement that eight of its suicide bombers killed 50 members of Yemen's security forces, according to US-based monitor SITE Intelligence Group.

Three simultaneous bombings hit security checkpoints in the coastal city at sunset, just as troops fasting during the holy Muslim month of Ramzan were breaking their fast, a security official said.

In the first attack, a suicide bomber on a motorbike asked soldiers if he could eat with them before blowing himself up, the official said.

Two other bombers approached soldiers on foot elsewhere in the city before detonating their explosives.

Shortly afterwards, two suicide bombers launched a fourth attack and blew themselves up at the entrance of an army camp, the official said.

In all, the attacks killed 40 soldiers as well as a woman and child who were passing by and wounded 37 other people, said Hadramawt's health chief Riad al-Jalili.

Al-Qaeda retains a strong presence in Mukalla, and the jihadists still control several towns in the interior valley of Wadi Hadramawt.

Last month, the Pentagon said a "very small number" of US military personnel had been deployed around Mukalla in support of pro-government forces.

The US Navy has several ships nearby, including an amphibious assault vessel, the USS Boxer, and two destroyers.

Al-Qaeda in the Arabian Peninsula, or AQAP, has been based in Yemen since 2009.

Both AQAP and the IS group have exploited the power vacuum created by the conflict in the impoverished country to expand their presence in the south and southeast.

There has been no let-up in the longstanding US air war against AQAP, which it regards as the jihadist network's most dangerous.

US strikes have taken out a number of senior Al-Qaeda commanders in Yemen over the past year.

The US military said this month that it had killed six Al-Qaeda fighters in three separate strikes in central Yemen.

AQAP "remains a significant threat to the region, the United States and beyond," said US Central Command, which oversees military operations in the Middle East.

On June 16, CIA director John Brennan told the Senate Intelligence Committee AQAP had several thousand "adherents and fighters" while there are also "several hundred" fighters loyal to the IS group in the war-torn country.

In recent months, AQAP and IS militants have also claimed several attacks on government and coalition targets in second city Aden, where the government has its base.

The Saudi-led coalition intervened in Yemen in March 2015 in support of President Abedrabbo Mansour Hadi against Shiite Huthi rebels who had seized the capital Sanaa and other areas.

But it later turned its firepower against jihadists impeding the government's bid to firm up its grip on southern areas recaptured from the rebels.