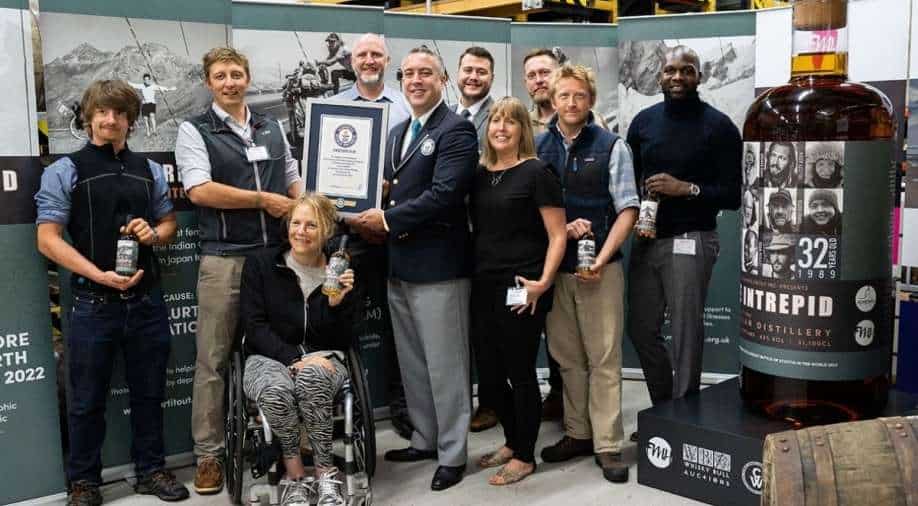 The auction house Lyon and Turnbull noted that The Intrepid, world's largest bottle of Scotch whisky, is pale gold and has a sweet taste with notes of apple

The Intrepid - the world's largest bottle of Scotch whisky, which is 5ft 11 inches tall and filled with 311 litres, has sold for about $1.4 million, according to the auction house Lyon and Turnbull. The bidding took place both live online on Wednesday (May 25) and was eventually sold to an international unknown collector. The auction house stated that The Intrepid is a fine 32-year-old single-malt distilled at the prestigious The Macallan in Speyside in 1989. The whisky entered the Guinness World Record in September 2021 when it was filled last year. The bottle contains the equivalent of 444 standard bottles.

The auction house Lyon and Turnbull noted that it is pale gold and has a sweet taste with notes of apple.

#TheIntrepid - officially the world's largest bottle of Scotch #whisky - reaches £1.1 million in today's auction. An adventure from the start, The Intrepid project is dedicated to the spirit & experience of exploration. pic.twitter.com/9G6TJ8nLQg

Founder of The Intrepid Project, Daniel Monk, said: "For me and the whole team The Intrepid project has always been about more than money."

He said, "This is a passion project to celebrate the life of my late father, Captain Stanley Monk who was himself an explorer and achieved many amazing things during his life. Today would have been his birthday so it was a perfect date to put The Intrepid up for auction."