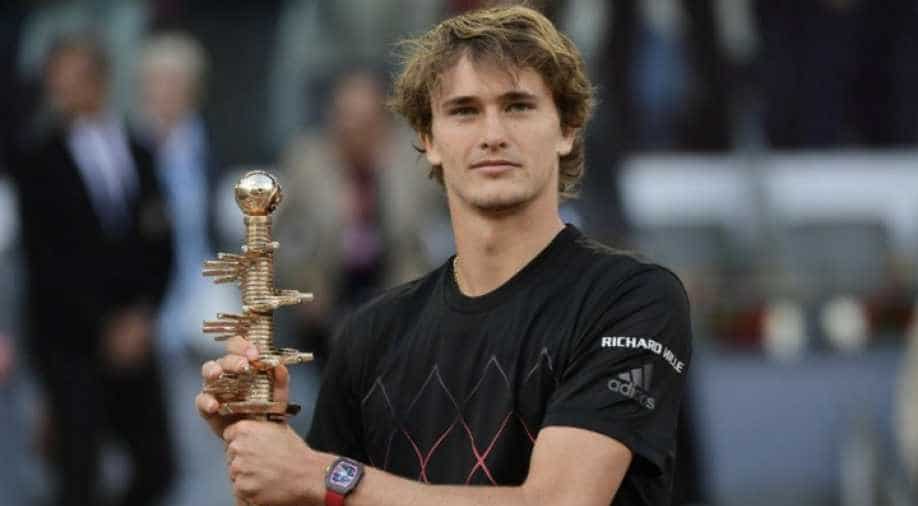 Dominic Thiem lost to Alexander&nbspZverev&nbspin the Madrid Masters final on Sunday and then said the German is now the best player in the world beneath Roger Federer and Rafael Nadal.

Zverev&nbsphas long been marked out as a future star of the men's game and his 6-4, 6-4 victory over Thiem suggests the German can be a major threat at the French Open later this month.

Thiem had ousted Nadal in the quarter-finals on Friday and he too will be among the small group capable of preventing the Spaniard from claiming an 11th Roland Garros crown.

But the Austrian was outplayed, and over-powered, by&nbspZverev, who collects his third ATP World Tour Masters 1000 title, the most prestigious tier of knock-out tournament beneath the four Grand Slams.

Zverev&nbspis now one of five active players to have won three, the others being Federer, Nadal, Novak Djokovic and Andy Murray.

Those four are all aged 30 or older, while&nbspZverev&nbspis 21, with Djokovic and Murray both attempting recovery missions after injury.

"I would say probably now, besides Roger and Rafa, he's the best," Thiem said. "You just need to look at his results."

Ranked third in the world,&nbspZverev&nbspis yet to transfer his talent and success in Masters events to Grand Slams, however, where his best result remains to reach the fourth round at Wimbledon last year.

On this evidence, that breakthrough is surely close, with the crowd on Manolo Santana court treated to an impressive display of aggressive baseline hitting. Thiem's 21 errors to&nbspZverev's 12 were also key.

The players in Madrid this week have remarked on the quickness of the courts and that has suited&nbspZverev, whose demon serve was almost untouchable in the opening set.

After conceding an early break for 2-0, Thiem's only sniff came at 5-4 when he opened up 0-30 on the&nbspZverev&nbspserve. But his opponent did not waver, letting out a roar of relief after clinching the frame.

Another break in the first game of the second meant Thiem was again playing catch-up and&nbspZverev&nbspcould have moved 3-0 clear had Thiem not saved two more break points.

Instead, Thiem stayed in touch to make&nbspZverev&nbspserve out. A sumptuous half-volley opened up two match points and&nbspZverevtook the first when a final Thiem forehand floated long.

"It's a great feeling,"&nbspZverev&nbspsaid. "Hopefully this will not be my last, hopefully I can continue to improve, and win a few more."