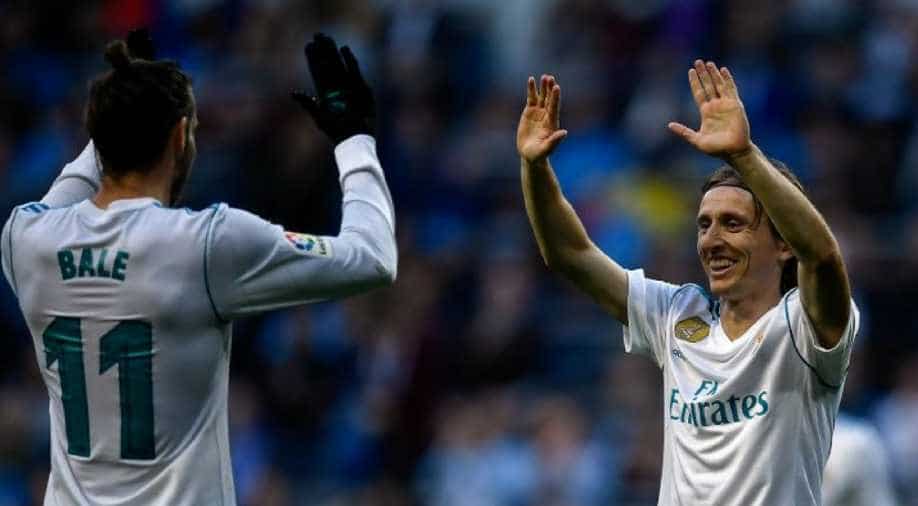 Luca Modric celebrates with Gareth Bale after scoring a goal during the match between Real Madrid CF and RC Deportivo. Photograph:( AFP )

Real Madrid moved back into the top four of La Liga by thumping lowly Deportivo La Coruna 7-1 on Sunday, with Cristiano Ronaldo ending a miserable run of league form with a late double.

Real Madrid manager Zinedine Zidane expressed his happiness at his side's dominant victory in the Spanish La Liga on Sunday after a poor spell for the Spanish giants piled the pressure on Zidane.

"I don't know if many things changed, I think what's changed here is just the final result, I think that's the difference because we were also playing very well against Villarreal and today we did the same when we were losing 1-0.

"We kept working and thinking about our moves, we were thinking about the match, we scored the equaliser pretty early and I'm happy about today because it was what we were missing, we needed that."

"We need to score a lot of goals and I'm happy about that."

Real had lost two of their last three league games and got off on the wrong foot against relegation-threatened Deportivo when former Atletico Madrid forward Adrian Lopez put the visiting side ahead against the run of play in the 23rd minute.

The Madrid side suffered a 1-0 home defeat to Villarreal last weekend and was keen not to have a repeat result, striking back quickly before swiftly establishing a comfortable lead with a brace for Cristiano Ronaldo, Gareth Bale and Nacho Fernandez, as well as a long-range strike from Luka Modric.

Real climbed back above Villarreal into fourth place on 35 points but are still far behind runaway leaders Barcelona, who top the standings with 51 points and can move 11 clear of nearest challengers Atletico Madrid if they beat Real Betis later on Sunday.