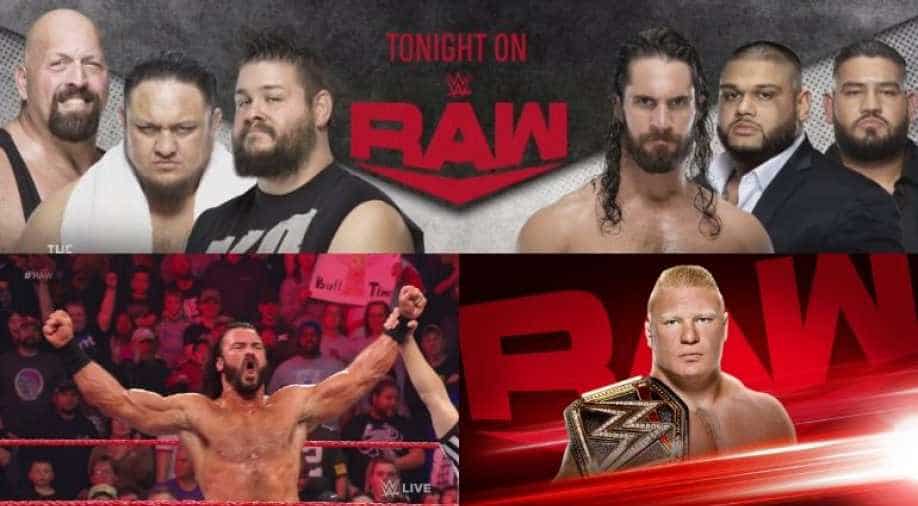 Brock clotheslining the R-Truth. Mojo Rawley rushed into the ring to pin Truth and earn the title. Mojo Rawley wins the 24X7 title.

WWE's Monday Night Raw did not fail to entertain and live up to its hype. The night started with an unadvertised Triple Threat match. The match was among Top contenders of the Royal Rumble Randy Orton, Drew McIntyre, and AJ Styles.

Before the match, Randy Orton kicked off this week’s show, mocking AJ Styles and the match announced for the evening. Styles interrupted and said Orton’s claims that he will win the Royal Rumble are false. The Phenomenal One will win the Rumble, he added that his RKO (Randy Orton's finisher) he used to defeat his opponent last week was more phenomenal than that of The Viper’s.

Drew McIntyre intervened and proposed a triple threat among the heavyweights. The match took off as the bell rang.

.@DMcIntyreWWE has something to say to @RandyOrton & @AJStylesOrg about the #RoyalRumble...#RAW pic.twitter.com/rQoMR6vm8E

Luke Gallows and Karl Anderson tried to interfere with the match to protect their 'OC' teammate AJ Styles. But they were knocked out by a Claymore (McIntyre's Finisher) and an RKO respectively.

Orton knocked out Styles with RKO but before he could pin him, he was hit by Claymore by Drew. Drew McIntyre pinned Orton to win the match.

Young prodigy Ricochet squared up Mojo Rawley and easily dominated the match by his skills and beat him. This shows Ricochet is a potential threat in the Royal Rumble. the dynamic competitor could emerge as the winner from the 30-man battle with a guaranteed title shot in the Wrestlemania.

Charlotte Flair was looking forward to avenging her brawl against Sarah Logan last week when she attacked Flaire from behind as she was approaching the ring.

Logan fled the ring as the match began and Flaire chased her to ringside but Sarah managed to turn things around on the Queen. Charlotte locked in the Figure-8 (Charlotte's signature lock-hold) to which Sarah tapped-out.

After the match, Charlotte tossed Logan out of the ring.

Paul Heyman and the WWE champion Brock Lesnar stepped into the ring to cut an in-ring promo, where Paul Heyman continued to project 'The Beast' as the winner of the Royal Rumble. Brock Lesnar last week confirmed that he was entering the royal rumble this year at number one. Heyman and Brock were booed by the crowd. Crowd's "You Suck" got under Brock's skin and for a while they left the ring. But Heyman felt that is was necessary to convey the message.

The same old in-ring promo was uplifted by R-Truth's comic cameo in between. He interrupted Heyman to officially declare his entry in the Royal Rumble, as he thought Paul was a part of it. But when he was told that Heyman was not entering the Rumble, he officially undeclared his previous statement. Brock could not control but laugh.

The segment ended with Brock clotheslining the 24X7 champion. Mojo Rawley rushed into the ring to pin Truth and earn the title. Mojo Rawley wins the 24X7 title.

WWE had arranged the first-ever Fist Fight match between Seth Rollins and his AOP (Akam and Rezar) versus Kevin Owens, Samoa Joe, and the Big Show.

The much-hyped match started after Rollins and the AOP attacked Big Show from behind as he was approaching the ring.

The six competitors brawled all around the arena. In one such incident K.O. (Kevin Owens) ran and wiped out Akam and Rezar.

Seth Rollins asked Buddy Murphy, who was sitting on the ring-side in disbelief after losing to Aleister Black for straight third time for help.

Seth Rollins and the AOP beat Kevin and his Co after Murphy intervened in the match and attacked Big Show.