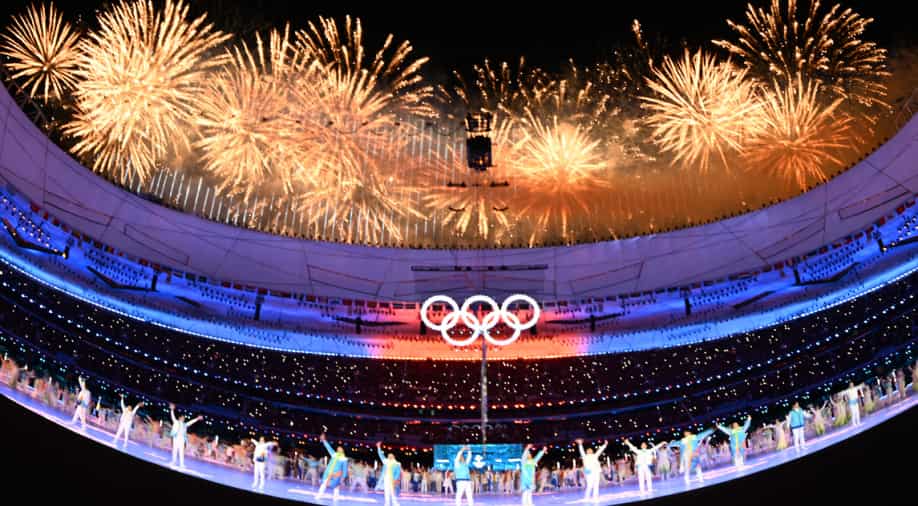 Amid the pomp of the closing ceremony, China could celebrate pulling off The Games on schedule, despite everything. It is a success, however, as measured by the low bar of avoiding total disaster

All along, Chinese officials insisted that the Olympics were not about politics, but rather sports. In the end, controversy and scandal haunted those, too.

For all of China’s efforts to carry on the Winter Games with a festive spirit, Beijing 2022 unfolded as a joyless spectacle: constricted by a global health disaster, fraught with geopolitical tensions, tainted once again by accusations of doping and overshadowed by the crisis in Ukraine.

Athletes marched into the Bird’s Nest stadium in Beijing on Sunday night to the sound of Beethoven’s Ninth Symphony, closing the most contentious Olympics in years, with a display of traditional Chinese knots, red lanterns and a final burst of fireworks that lighted up a cold, clear night.

Amid the pomp of the closing ceremony, China could celebrate pulling off The Games on schedule, despite everything. It is a success, however, as measured by the low bar of avoiding total disaster.

The most indelible memory of these Winter Olympics — beside images of Olympic workers and volunteers enrobed in hazmat gear — will very likely be that of a 15-year-old Russian skater falling on the ice after being allowed to compete despite a test showing traces of a banned heart medicine.

The skater, Kamila Valieva, broke into tears after her dismal performance, only to be berated by her coach, leaving organizers and observers alike to ponder how much they demand of athletes who are, after all, still children.

The International Olympic Committee, which spent years fending off doubts about choosing an authoritarian nation as host, spent much of the past two weeks dodging controversy in Beijing.

In addition to troubling issues raised by the Valieva episode, it faced questions about the conditions for athletes who isolated after testing positive for COVID; about the fate of Peng Shuai, the tennis player and former Olympian who accused a senior Chinese official of sexual assault; about the inevitable injection of politics into an event meant to rise above them.

“What can one say, except to heave a sigh,” said Orville Schell, the director of the Center on U.S.-China Relations at the Asia Society in New York. “Such an august occasion, designed to promote openness, good sportsmanship and transnational solidarity, ended up being a heavily policed, brittle, Potemkin-like simulacrum of the Olympic ideal.”

The IOC has since revised the selection process for host cities, in part to avoid the chance of once again making a Faustian bargain like the one seven years ago, when Beijing edged out Almaty, the former capital of another authoritarian nation, Kazakhstan.

During Sunday’s ceremony, Mayor Chen Jining of Beijing passed the Olympic flag to the mayors of two Italian cities, Milan and Cortina d’Ampezzo, which will host the Winter Olympics in 2026.

The next Summer Games will be in Paris in 2024, in Los Angeles in 2028 and in Brisbane, Australia, in 2032 — places where it is hoped that questions of human rights will not dominate the preparations.

China became the first nation to organize winter and summer editions in the same city, an accomplishment held up as a triumph of Communist Party might. The country’s leader, Xi Jinping, attended the closing, as he did the opening 16 days ago, greeted by a roar equaled only when the large Chinese team entered.

The 2008 Summer Olympics, which took place in many of the same venues in the Chinese capital, felt then like an appeal for respect after decades of poverty and political chaos.

To China’s critics, these Games felt instead like a demand.

Chinese officials accused the United States and other nations of politicizing the Olympics, denouncing President Joe Biden’s diplomatic boycott as “a farce.” And yet China also injected its own political elements.

Xi met the Russian president, Vladimir Putin, only hours before the opening ceremony, a show of support in the face of Western threats to punish Moscow if its forces invade Ukraine.

China also chose as an Olympic torch bearer a soldier wounded in a deadly border clash with India in 2020. The Olympic flame was lit by a cross-country skier from Xinjiang, the province experiencing a mass detention and re-education campaign that the United States has called genocidal.

One official with the Beijing Organizing Committee warned participants not to violate the Olympic Charter’s rule against making political statements. Another official violated it by restating China’s claims on Taiwan, the self-governing island democracy, and denouncing criticism of its policies in Xinjiang as lies.

Those comments prompted Thomas Bach, president of the International Olympic Committee, to issue a public rebuke of the hosts, although it was mild. The committee’s overall deference prompted searing criticism from China’s critics, who said that The Games were allowed to “sportswash” grave violations of basic rights.

Through it all, the sports did shine through.

Norway, a nation of just 5 million people, repeated its extraordinary success in the Winter Olympics, topping the medals table with 16 golds, a record, and 37 medals overall. Eileen Gu, an 18-year-old skier from San Francisco who competed for China, became the event’s breakout star.

Some athletes, focused on their sports above all, praised China’s preparations. Nick Baumgartner, the veteran American snowboarder who, with Lindsey Jacobellis, won a gold medal in snowboardcross, described the mountain venues northwest of Beijing as “amazing.”

“I will say, out of the four Olympics I’ve been to, the manicuring and just how precise and beautiful everything is, is above and beyond,” he said after his winning race in Zhangjiakou.

The events unfolded inside what organizers called a “closed loop” system that turned hotels and venues into islands in an Olympic archipelago, separated from ordinary Chinese by temporary fences and checkpoints. Everyone inside received a daily test for COVID.

As a tool of China’s “zero COVID” policy, it worked. Only a few athletes had to miss their competitions, and by the end, there were days when not a single test came back positive. Many athletes accepted the measures. Some saw the upside in them.

“To be honest, you get a mouth swab every day and you get your own bedroom,” Meryeta O’Dine, a Canadian snowboarder and bronze medal winner, said, referring to the decision not to assign roommates to minimize close contacts. “It’s actually been pretty sweet.”

After the final parade into the closing ceremony, the national teams lingered on the stadium’s illuminated floor, meant to resemble a sheet of ice, as if eager to make the moment last a bit longer.

Outside the closed loop, the mood around Beijing was subdued. No foreign spectators were allowed, and only specially invited and screened Chinese visitors could attend.

“It is a Winter Olympics that makes China’s leadership happy,” Wu Qiang, an independent political analyst in Beijing, said. “It has nothing to do with the common people.”

The half-empty arenas rarely pulsed with excitement, although fans perked up for the Chinese athletes. The Chinese team had its best haul of medals in a Winter Olympics, winning nine gold medals and 15 overall.

It was, perhaps, a result of Xi’s pledge to create a nation of more than 300 million winter sports enthusiasts in a country with little tradition of them.

Bach, the IOC president, praised that accomplishment on Sunday. “The positive legacy of these Olympic Games,” he said, “is ensured.”

Even so, The Games underscored the concerns facing the Olympic movement. For much of the world, these Games passed by with a shrug. Television viewership in the United States was down about 50% from the 2018 Pyeongchang Olympics; there were similar drops in Canada, Britain and other countries.

What The Games mean for China itself in the end remains to be seen. Within the other closed loop, that of the country’s media and propaganda ecosystem, China triumphed.

Outside China, The Games are likely to have little effect on the world’s perception. “Getting some positive coverage, or at least less-negative coverage, doesn’t necessarily translate into transformation of public perceptions about China,” said Maria Repnikova, an expert at Georgia State University on China’s “soft power.”

Nils van der Poel, a Swedish speedskater who won two gold medals, said that it was “terrible” to award the Olympics to China, and referenced Nazi Germany’s hosting The Games in 1936. “I think it is extremely irresponsible to give it to a country that violates human rights as blatantly as the Chinese regime is doing,” he told a newspaper.

In 2008, China’s holding the Olympics actually led to more negative views of the country, according to global opinion surveys, as international attention threw light on the nature of the political system.

Back then, many wondered whether being an Olympic host would induce positive change in the country. This time around, few people have entertained such hopes.