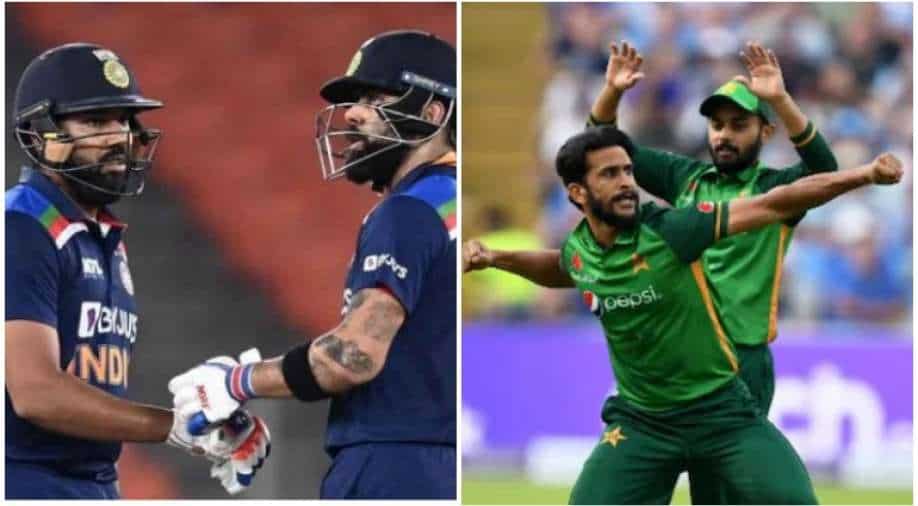 Ahead of the much-awaited India-Pakistan clash at the T20 World Cup, Hasan Ali is confident that the Men in Green have it in them to beat Virat Kohli & Co.

Pakistan haven't had much success versus Team India in ICC events. To date, they are yet to beat India in the ODI and T20 World Cup. However, the Men in Green remain ahead of India, by 3-2, in the Champions Trophy face-offs. Thus, Babar Azam & Co. will look to replicate their 2017 Champions Trophy final performance versus Virat Kohli's India when both the sides meet in the forthcoming T20 World Cup, in the UAE from October 19.

For the unversed, India and Pakistan are set to lock horns on October 24, at Dubai International Cricket Stadium, as both sides are in the same group (Pool 2) in the showpiece event. Ahead of the marquee clash, pacer Hasan Ali feels Pakistan can beat India and they will look at their 2017 CT final heroics as an inspiration.

"When we won the Champions Trophy (in 2017), it was a very good time for us and we will try to beat them again in the T20 World Cup. We will give our best. Playing against India is always a pressure game because of the expectations of fans from both countries," Hasan Ali said on Wednesday (September 14) as per a report in India Today.

"Even those people who don't normally watch cricket follow the India vs Pakistan matches, so the pressure on the players is high but we will give it our best," he added.

It is important to note that Hasan was one of the star-performers for Pakistan in the CT'17 final versus India (returning with 3 for 19). Thus, he will look to replicate the same this time around when India-Pakistan lock horns in the forthcoming World Cup.

India and Pakistan's group also comprise New Zealand, Afghanistan and two other teams who will join from the qualifiers.