'When MS Dhoni was in the team, it was not like.....': Virat Kohli on giving up Team India captaincy 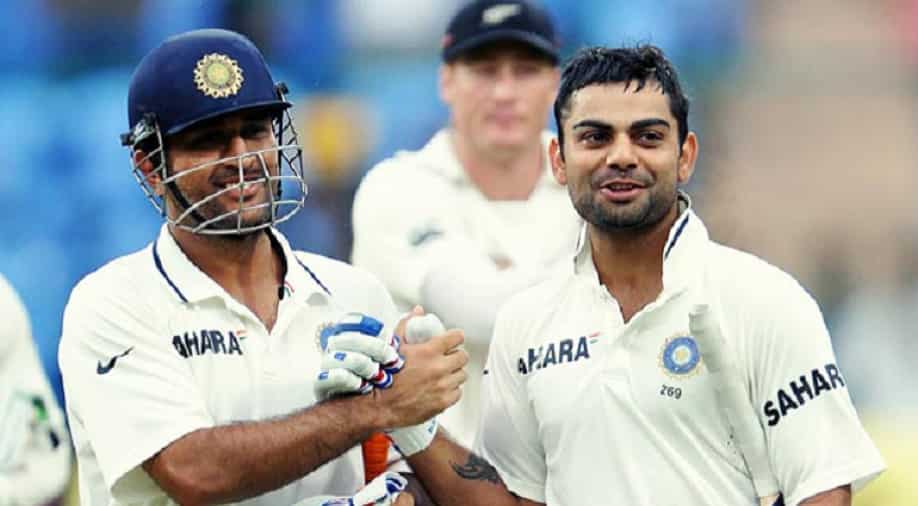 Virat Kohli opened up on resigning as Team India's captain as he gave up the Test captaincy early this year. He cited MS Dhoni's example and said the following:

Virat Kohli gave up Team India captaincy altogether when he stepped down as the Test captain post India's 2-1 series loss to Dean Elgar-led South Africa, early this year. Earlier, BCCI had already sacked Kohli as the ODI captain whereas he had himself announced -- in mid-September 2021 -- of stepping down as the shortest format's captain after the World Cup in the UAE, in October-November.

A lot has been said and written on Kohli giving up India captaincy altogether. His decision to quit as the Test captain shocked many as his record as a leader in whites is second to none (among India skippers). The 33-year-old spilled the beans on his decision and cited an example of his predecessor MS Dhoni.

ALSO READ | He cherished that post so much: Ponting reflects on Virat Kohli's decision to resign as India's Test captain

"See, I think firstly you need to have a complete understanding of what you set out to achieve and whether you have achieved those targets or not. Everything has a tenure and time period, so you have to be aware of it. As a batter, you might be able to give more to the team, so take pride in that," said Kohli on an episode of 'Fireside Chat with VK'.

He further opined, "You do not need to be a captain to be the leader. When MS Dhoni was in the team, it was not like he was not the leader, he was still the guy from whom we wanted to have input. To win or not win is not in your hands, the striving for excellence and to be better every day, is not something you can do short term. When it comes to a culture, it will last beyond your playing years and your responsibility."

ALSO READ | 'I am not married to him': Harbhajan Singh gives cheeky response, clears air on rumoured rift with MS Dhoni

Kohli added, "To add to that, moving on is also a part of leadership, to understand the right time to do that. I think one has to embrace all kinds of roles and opportunities. I have played under MS Dhoni for a while and then I became the captain, my mindset has been the same all this while. I always thought like a captain when I was just a player in the team."

While Rohit Sharma has taken over India's limited-overs captain, Kohli's successor is yet to be named in the red-ball format. As of now, Rohit leads the race to become the all-format skipper whereas KL Rahul, Jasprit Bumrah and Rishabh Pant are the other contenders.