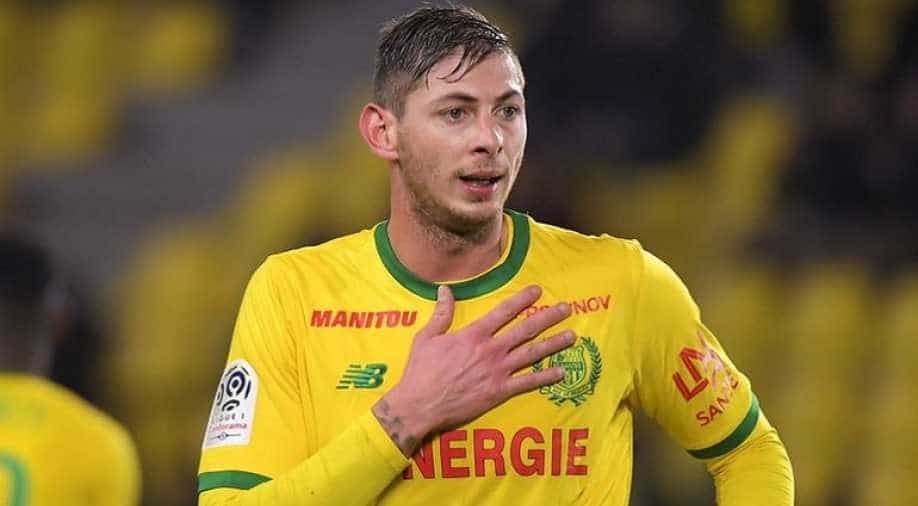 Nantes players wore Sala's name on the back of their shirts when the game kicked off at Stade de la Beaujoire.

Nantes paid a moving tribute to their former team-mate, Emiliano Sala, as the team played their first game since the disappearance of the Argentine striker at the Stade de la Beaujoire.

Cardiff City's new signing Sala and the aircraft's pilot, David Ibbotson, have been missing since their plane disappeared over the Channel last week.

Before the game, players warmed up wearing t-shirts with "On T'aime Emi" (We Love You Emi) written on the back and the player's photo on the front.

A giant picture of Sala was projected onto the centre circle.

The whole Nantes squad formed a circle moments before the match started as coach Vahid Halilhodzic spoke to the players.

Nantes players wore Sala's name on the back of their shirts when the game kicked off.

The tearful fans held a minute's applause and chanted his name.

Former Nantes forward Yacine Bammou, who became a close friend of Sala's before leaving for Caen, was in tears watching on, while coach Vahid Halilhodzic also struggled to contain his emotions.

"It's hard to talk about this, it's a terrible moment, we're all shocked," Halilhodzic said earlier on Wednesday.

"Hope, whether it's slim or not? I don't know, but we're still waiting for a surprise, I hope it will come very soon.

"He is such a nice, kind, respectful, endearing boy and a true warrior who loved the club."

The game finished 1-1, with Nantes full-back Fabio and Saint-Etienne midfielder Yann M'Vila both sent off for a scuffle on the stroke of half-time.

Earlier, the accident investigators said two seat cushions had been found which are likely to have come from the plane carrying Sala and the pilot.

"I did not have much hope. Now we must try to mourn and then move forward," said 69-year-old Nantes supporter Andree Guittet.