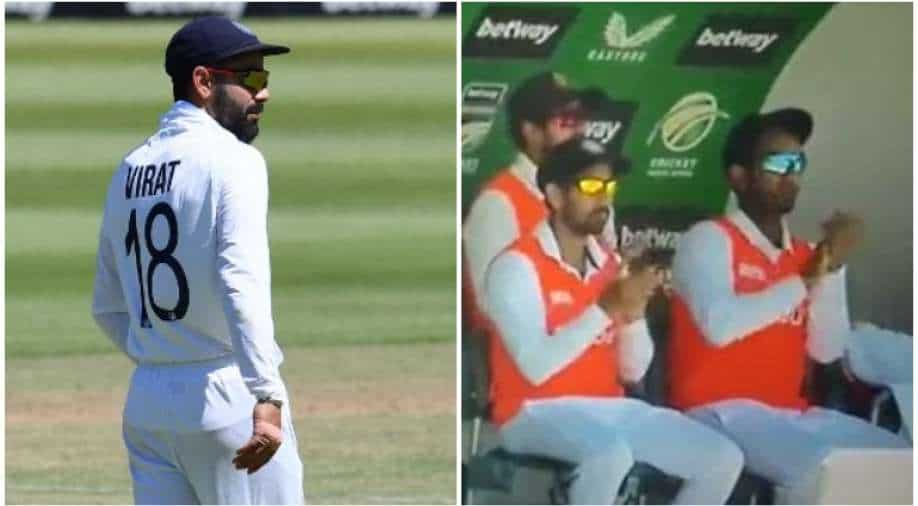 After India bounced back with some key wickets on Day 2 of the Cape Town Test, Captain Kohli inspired the Indian dressing room to go all-out and cheer for the bowlers. Here's the video:

Team India and South Africa have been involved in a humdinger of a three-match Test series in the rainbow nation. After India won the series opener in Centurion, the Dean Elgar-led Proteas bounced back in style to win the second and penultimate Test and level the series 1-1.

The series decider is interestingly poised with both sides fighting it hard at Newlands, Cape Town. On Wednesday (January 12), Virat Kohli-led Indian team had a tough ask to prevent SA from running ahead in the contest after being bundled out for 223 in the first innings on Day 1. When Day 2 kicked off, SA were 13-1 and soon reduced to 45-3 before Keegan Petersen-Rassie van der Dussen's fourth-wicket stand flourished for the home side.

After India got rid of van der Dussen, Petersen and Temba Bavuma joined forces and took the innings forward. Against the run of play, Mohammed Shami got rid of Bavuma as it led to an opening for India to stop SA from taking a vital first-innings lead. After India bounced back with two key wickets, Captain Kohli inspired the Indian dressing room to go all-out and cheer for the bowlers.

Kohli celebrates the wickets.. looks towards his team dug out and shouts 'Keep Clapping Boys.. Keep Clapping' and this follows..

This guy just creates an amazing atmosphere in the match.. pic.twitter.com/ens77zqg3M

After Day 2, Jasprit Bumrah, speaking at a press conference, also confirmed that the fast bowlers always have Kohli's back.

"I made my Test debut under him. It's always wonderful that he is there to back us. He always gives lot of motivation to all the bowlers. He brings a lot of energy to the side. It's always good to play under him," Bumrah told on Wednesday.

"It’s special that I started my journey over here and came back here and played a Test match and picked up a 5-wicket haul. Personal performances are good, but when you make an impact and the team wins, that gives you more satisfaction," he added.

At present, India will be looking to post anything over 250 to challenge Elgar & Co. in the final innings and win their maiden Test series on South African soil.