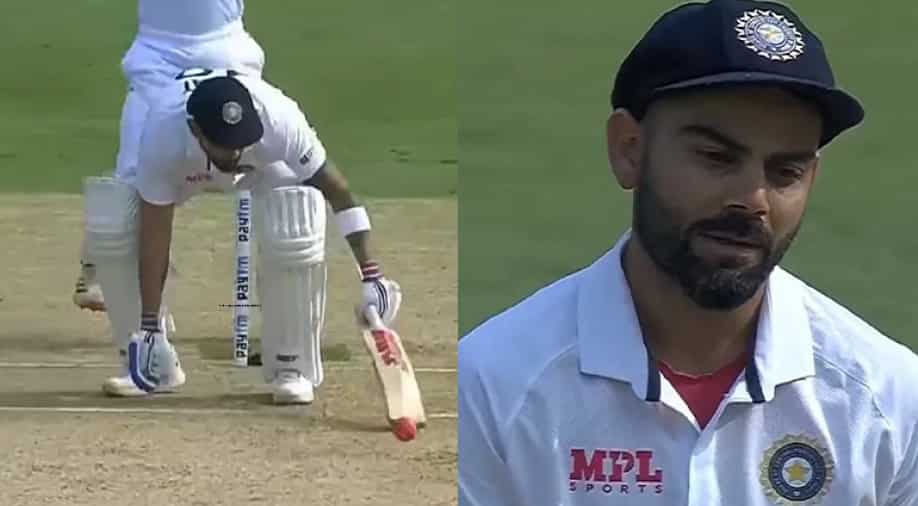 Virat Kohli was left stunned after his dismissal in 2nd Test against Sri Lanka. Photograph:( Twitter )

Virat Kohli was stunned by an unplayable delivery from Dhananjaya de Silva on Day 1 of the second Test between India and Sri Lanka.

Virat Kohli's wait for his 71st international century extended yet again on Saturday (March 12) after the Indian batter was dismissed on 23 runs on Day 1 of the ongoing second Test between India and Sri Lanka at the M Chinnaswamy Stadium in Bengaluru. Kohli was once again dismissed by a spinner as his struggles against spin continued in the second Test.

India and Sri Lanka locked horns in the second and final Test of the two-match series in Bengaluru on Saturday. India won the toss and opted to bat first in the pink-ball game and the hosts got off to a poor start as they lost their openers Mayank Agarwal (4) and Rohit Sharma (15) cheaply.

Kohli, who came out to bat at number 4, posted a 47-run stand for the third wicket with Hanuma Vihari (31) before the latter was dismissed in the 27th over to leave India reeling on 76/3. Kohli was cautious in his approach and was looking to play a big knock but ended up getting trapped lbw by De Silva on 23 off 48 balls.

The former Indian skipper had no answer to De Silva's excellent delivery which was almost unplayable as it kept low after hitting the ground. Kohli was left in disbelief after being stunned by the spinner and his reaction soon went viral on social media.

Also Read: 'Are you in jail?': Indian fans troll PCB as Marnus Labuschagne shares pic of his 'daal and roti' meal

India's top-order crumbled on Day 1 as the spin assisted spinners. Shreyas Iyer was the lone fighter for India as he notched up his half-century to take the team's total beyond the 250-run mark after the likes of Kohli (23), Rohit (15), Agarwal (4) and Rishabh Pant (39) failed to make an impact.

Iyer missed out on a deserved hundred by just 8 runs as he notched up a brilliant knock of 92 runs to help India post 252 runs on the board in their first innings. The onus will now be on the Indian bowlers to bundle out Sri Lanka cheaply in their first innings to keep the hosts in the game.