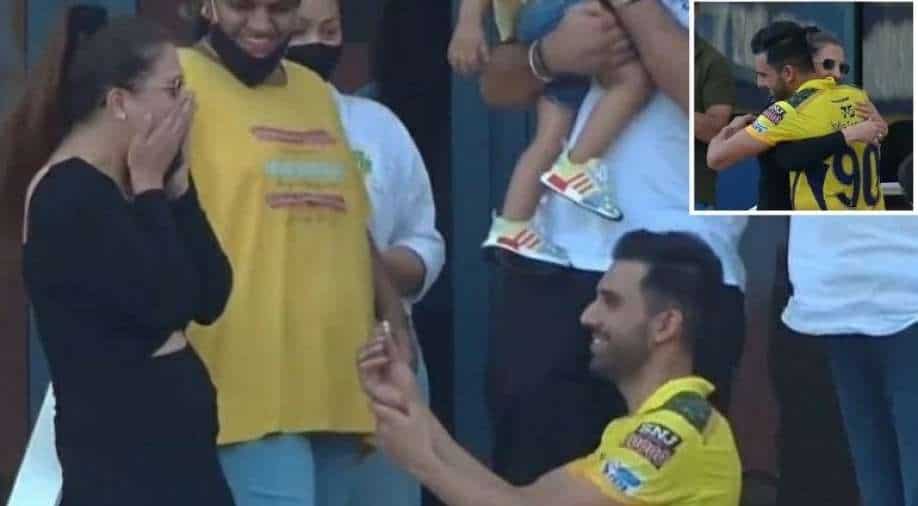 In the video, Chahar was seen placing the ring on his girlfriend's finger. She ecstatically said yes and hugged the cricketer

Love is in the air!

Always expect the unexpected in the Indian Premier League as, despite a loss against Punjab Kings on Thursday (October 7), the Chennai Super Kings camp has something special and memorable to celebrate as the team's star pacer Deepak Chahar proposed to his girlfriend in the most romantic way possible.

CSK's third defeat in a row didn't intimidate Chahar as he got on one knee and proposed to his girlfriend Jaya Bhardwaj, who was in the stands during the Match 53 of IPL 2021 in Dubai.

ALSO READ | Who is Jaya Bhardwaj? All you need to know about CSK pacer Deepak Chahar's fiance

Adorable videos and photos of the Bollywood-like proposal went viral on social media as fans and followers started sending their wishes and blessings for the cute couple.

In the video, Chahar was seen placing the ring on his girlfriend's finger as she ecstatically said yes and hugged the cricketer.

Watch how Deepak Chahar proposed to his girlfriend:

Chahar also posted the video on his Instagram handle and captioned it as a "special moment". In another post, the pacer wrote, "Picture says it all. Need all your blessings #taken"

Deepak Chahar and his fiance after the proposals. pic.twitter.com/z2QX2y1ZYr

During the match, skipper KL Rahul hit an unbeaten 98 to steer Punjab Kings to a convincing six-wicket win over CSK. Punjab, who finished with 12 points and need a miracle to make the playoffs, cruised to their victory target of 135 with seven overs to spare as Rahul smashed the winnings six in Dubai.

Punjab pace bowlers Arshdeep Singh, a left-arm quick, and Chris Jordan took two wickets each to set up the win after they restricted Chennai to 134-6.

South Africa's Faf du Plessis hit a 55-ball 76 but the rest of the batting fell apart including England import Moeen Ali out for nought off Singh.

Rahul came out firing as he hit Australian fast bowler Josh Hazelwood for a six and two fours in the fourth over to set the tone for the chase.

"Plan was clear, I had the license to go from ball one," said Rahul, who hit 7 fours and 8 sixes to top the IPL batting chart with 626 runs. "Today was one of those days where I could hit every ball."

Punjab now rely on results of the other games for a place in the playoff.