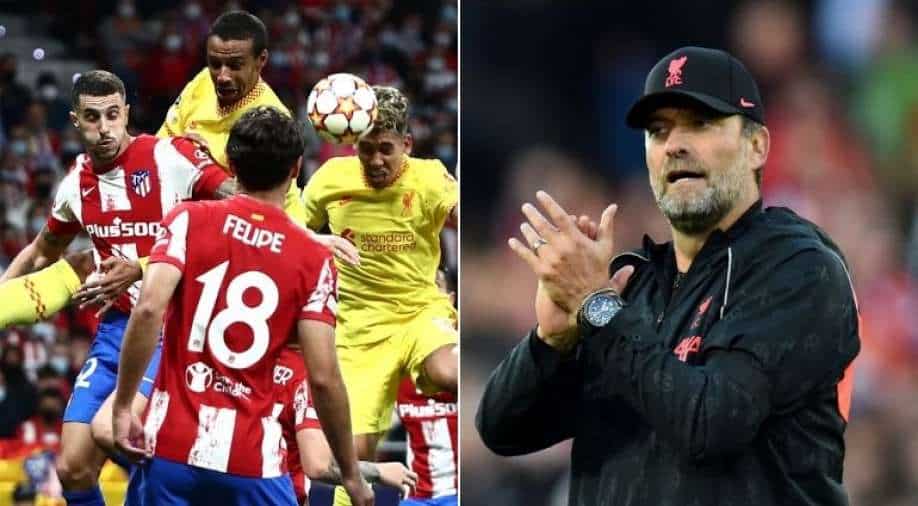 Klopp turned to shake hands with his counterpart Diego Simeone, who refused it and ran down the tunnel in frustration at the full-time whistle

Liverpool manager Jurgen Klopp walked out of the interview after a dramatic Champions League contest against Atletico Madrid that his side won 3-2 on Tuesday (October 19) at the Wanda Metropolitano.

Mohamed Salah scored twice as Liverpool took charge of Group B, in the match, Atletico's Antoine Griezmann also scored twice but was sent off for a dangerous high boot in the face of Roberto Firmino as he challenged for a high ball.

The drama even continued after the match when Klopp turned to shake hands with his counterpart Diego Simeone, who refused it and ran down the tunnel in frustration, Klopp then gave him a thumbs up.

During the post-match presentation, a journalist implied that the Liverpool boss was 'angry' to which he replied, "Why was I angry? I am not such an idiot that you can [ask a] little bit question here. I was not angry at all."

"Have a look. I can imagine you want to make a story out of that, but I wanted to shake his hand, he [Simeone] doesn't want it, he added.

"In that moment I can understand that, he was running inside. He's emotional, I'm emotional, and you are not a nice person because you want to make a story out of that. You said I'm angry, when was I angry? Now I am angry because of your question, come on," Klopp added.

When the journalist continued with his line of questioning, Klopp concluded by saying, "I'm now angry because of your question, come on."

During the match, Salah opened the scoring with a deflected effort in the eighth minute and Naby Keita added a second with a thunderous volley five minutes later. Atletico came roaring back, with Griezmann at the centre of the action. First, he steered home a Koke shot in the 20th minute to reduce the deficit and 14 minutes later he drew his side level, a superb first touch opening up the space in front of him for a clinical finish low past Alisson's left hand.

Defender Mario Hermoso conceded a penalty by barging into Diogo Jota, and Salah made no mistake from the spot to put Liverpool back in the lead. However, Liverpool seemingly tripped themselves up again when Atletico Madrid were awarded a penalty after Jota appeared to bundle over Jose Maria Gimenez, but the decision was overturned after a lengthy VAR review.

The win kept Liverpool top in Group B on nine points, five ahead of second-placed Atletico and Porto in third, with AC Milan pointless at the foot of the table.