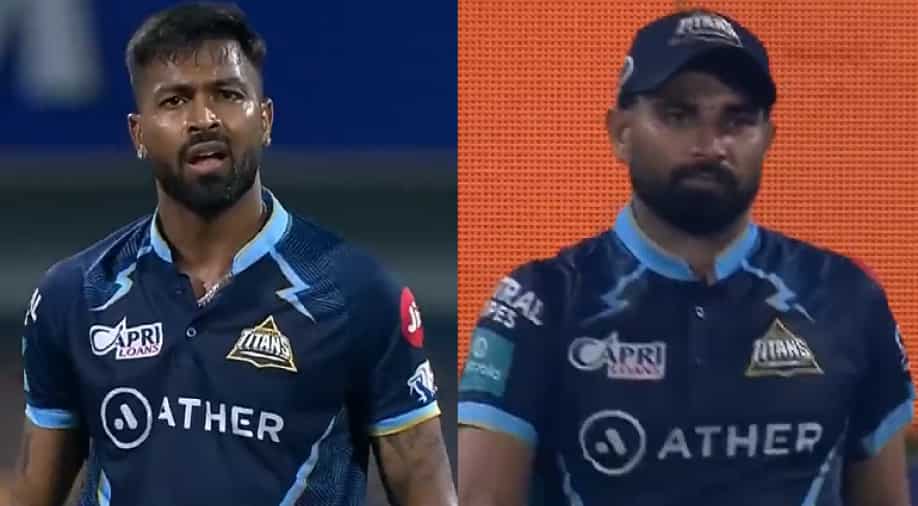 Gujarat Titans skipper Hardik Pandya was spotted losing his cool on his teammate Mohammed Shami during his side's clash against SRH and was slammed by fans on social media for his behaviour.

Sunrisers Hyderabad (SRH) handed Gujarat Titans (GT) their first defeat in the ongoing Indian Premier League (IPL) 2022 season on Monday (April 11). SRH chased down the target of 163 runs with five balls to spare as they thrashed Hardik Pandya & Co. by 8 wickets to bag their second win on the trot. Their win also marked an end to GT's unbeaten streak of three games in the tournament.

It was a clinical performance with the bat from SRH in the run chase as Williamson led from the front with a captain's knock of 57 runs off 46 balls. He added an opening stand of 64 runs with Abhishek Sharma, who continued his fine form and scored a quickfire 42 off 32 balls. The duo got SRH off to a flyer and set the stage for a comfortable run chase for their side.

Hardik, who has been enjoying a great start to his stint as captain of Gujarat Titans, saw his side slip to their first defeat this season and lost his cool during the game. In the 13th over of SRH's run-chase, Hardik was taken to the cleaners by Williamson, who slammed two back-to-back sixes on two deliveries.

On the final delivery of that over, SRH batter Rahul Tripathi played a shot in the air which landed close to Shami, who was fielding at deep third man. The pacer didn't attempt to complete the catch and was on the receiving end of skipper Hardik's fury. The GT captain was livid as he hurled loud words at Shami, who is a senior fast bowler for GT and Team India.

Hardik's action didn't go down well with fans on social media as the Gujarat Titans captain was slammed for his behaviour against Shami. The all-rounder was criticised by many on social media, who hit out at him for disrespecting a player of Shami's stature.

Here are some reactions:

Dear Hardik, you are a terrible captain. Stop taking it out on your teammates, particularly someone as senior as Shami. #IPL #IPL2022 #GTvsSRH pic.twitter.com/9yoLpslco7

Can’t believe Hardik Pandya just insulted senior player and an Indian legend Mohd. Shami for not taking the risky catch and preferred to save the boundary. Hardik’s temper tantrums during tight situations have been outright cringe. #GTvsSRH #IPL2022 pic.twitter.com/yAyMmFkRwS

I feel the behaviour of Hardik Pandya on the field - shouting on David Miller & Mohammad Shami - is unacceptable. I get the passion part but that behaviour is not done. GT not going through the qualifiers for sure.

Before this match, he shouted Miller for the runout. Now abusing shami
Hardik Pandya attitude is gone beyond the limits. This guy not deserved a place in team India. https://t.co/V88JejkiFc

Tripathi later retired hurt after injuring himself while batting. However, it was a comprehensive win for SRH, who rode on skipper Williamson's half-century and crucial knocks from Sharma (42) and Nicholas Pooran (34) to get over the line with five balls to spare. SRH have now won their last two games in a row and are currently sitting at the eighth spot on the points table.