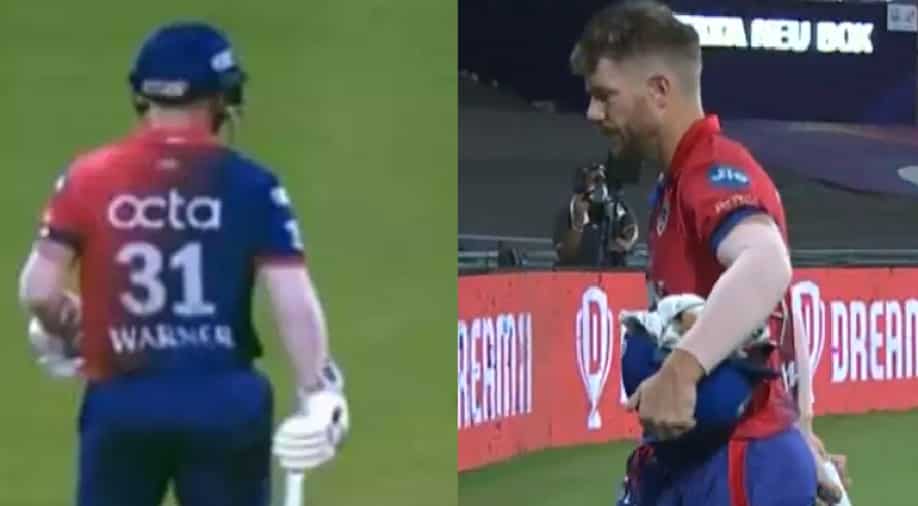 David Warner was dismissed on a golden duck against Punjab Kings. Photograph:( Twitter )

Delhi Capitals (DC) opener David Warner was sent packing on a golden duck after deciding to change his strike in the last minute against Punjab Kings (PBKS) in IPL 2022 on Monday.

David Warner fell prey to his own last-minute decision to change strike as Delhi Capitals (DC) locked horns with Punjab Kings (PBKS) in the ongoing Indian Premier League (IPL) 2022 on Monday. Warner opened the innings with Sarfaraz Khan and was not looking to face the first ball as he headed to the non-striker's end at the start of the first over.

However, the Aussie star decided to change the strike at the last minute after it was confirmed that part-time spinner Liam Livingstone will bowl the first over for PBKS. Warner had a change of mind and was seen walking towards the striker's end to face the first ball from Livingstone.

However, little did the DC opener know that the decision might backfire for him. He ended up giving away an easy catch to Rahul Chahar at the backward point on the very first ball he faced from Livingstone to bag a golden duck as DC got off to a poor start in the game.

#Warner changed ends seeing Livingstone but got out for golden duck pic.twitter.com/e9uz3jeNiN

Sarfaraz combined with all-rounder Mitchell Marsh to steady the ship for DC after Warner's early departure. Sarfaraz slammed a quickfire 32 off 16 balls while Marsh continued his great form with the bat as the duo added 51 runs for the second wicket. Marsh then shared another crucial stand of 47 runs for the third wicket with Lalit Yadav (24).

Marsh, who scored a match-winning half-century in DC's last outing against Rajasthan Royals has been fabulous once again against Punjab Kings. Delhi Capitals will be hoping to post a big total on the board at the DY Patil Stadium in Mumbai to ensure they can bag their second win in a row.

DC have their fate in their own hands when it comes to the playoffs race this season. If they manage to win their remaining two matches in a row, Delhi Capitals have a healthy chance of qualifying for the playoffs this season. They are currently at the 5th spot on the points table with 12 points from as many games.