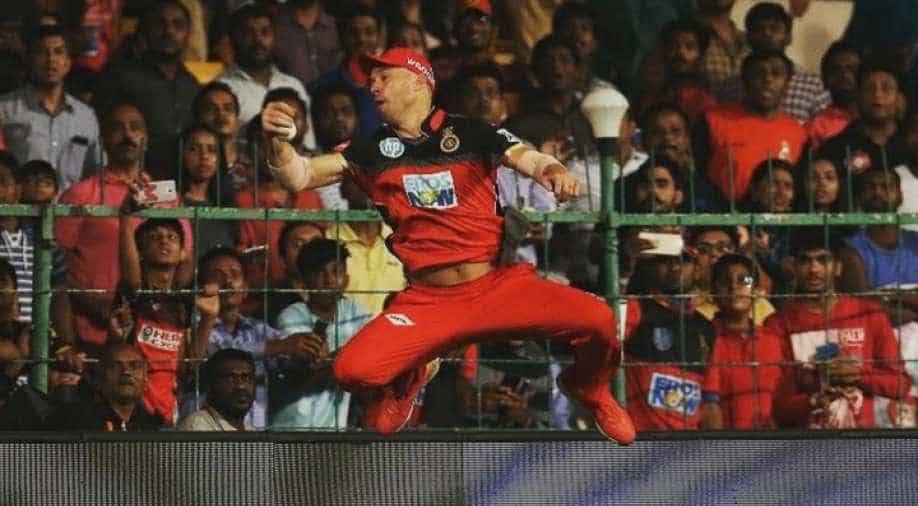 Virat Kohli-led Bangalore defeated table-toppers Hyderabad by 14 runs in a must-win match to stay alive in the Indian Premier League at M. Chinnaswamy stadium on Thursday.

The Bangalore team suffered initially but now, somehow have bounced back in the ongoing tournament and the skipper Virat is using all the possible cards from the deck to book a berth in the play-offs.

Not only Virat Kohli, in fact, all the players are giving their 100 per cent in order to move further in IPL 2018.

Like yesterday, while playing against Hyderabad, AB de Villiers took an acrobatic catch and was hailed as a "Spiderman" by captain Virat Kohli.

South African star cricketer leaped on the deep mid-wicket boundary to stop a ball heading for a near-certain six and catch out Hyderabad batsman Alex Hales.

The video of the catch got viral on the social media and on the brilliant efforts of ABD, Virat said, "AB's catch was spiderman stuff, you don't do that as normal human beings," an ecstatic Kohli said after his team's win."

On the other hand, De Villiers, who has accumulated 427 runs in 11 games including five half-centuries modestly called it a  "nice catch".

"I made it look better than actually, it was," the 34-year-old said after being adjudged man of the match."Got into a bad position, the ball had a bit of a curve on it. The minute I took the jump, I realized a little bit of my body was outside. I just had to put that right and luckily it stuck."