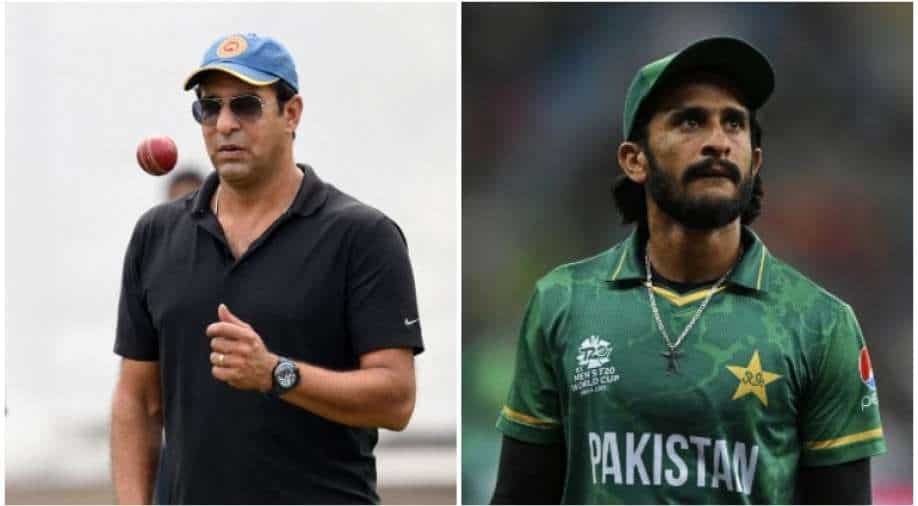 After Pakistan lost the T20 WC semi-final versus Australia, Hasan Ali has been trolled mercilessly for dropping a catch. Wasim Akram has now come to his support.

Pakistan locked horns with Australia in the second semi-final of the T20 World Cup 2021 edition, being held in the UAE, on Thursday evening (November 11). Despite being termed as favourites for the clash, Babar Azam-led Pakistan lost to Aaron Finch's Australia by five wickets as the Men in Green failed to defend 177 runs on board.

Being asked to bat first, Babar-led Pakistan posted a competitive 176-4, courtesy Mohammad Rizwan's 67 and Fakhar Zaman's 55*. In reply, Australia were reduced to 96-5 before Marcus Stoinis and Matthew Wade's unbeaten 81-run sixth-wicket stand took their side past the finish line.

In the penultimate over, Wade took on in-form bowler Shaheen Afridi in order to finish the proceedings. He gave a chance to Hasan Ali, stationed a the deep, before the pacer dropped a regulation catch. Hasan also returned wicketless in his four-over spell, finishing with 4-0-44-0. Thus, the 27-year-old has been mercilessly trolled by the Pakistani fans.

Wasim Akram, speaking to A Sports, has urged the nation to not add fuel to the fire by targeting 'poor Hasan Ali'.

"What we don’t want is that the whole country gets after poor Hasan Ali now. I have been through this, Waqar Younis has been through it. In other countries, it’s just a game for people. Next day, you say well-tried, bad luck, better luck next time, and move on," Akram told A Sports.

"This situation is as tough for the players as it is for the fans. The players will go to their rooms, they’ll be quiet, they won’t talk to their families and the defeat will haunt them. As a nation, we don’t want to add fire to that fuel," he added.

At the post-match presentation, Babar said, "I thought we scored as many runs as we had planned in the first innings. I think if we give such teams a chance in the back end, it is going to be costly. The turning point was that dropped catch. Had we taken it, the scenario could have been different. The way we gelled and played the entire tournament, I am satisfied as a captain. Hopefully we'll learn from this for the next tournament. When you play so well throughout, there were small mistakes that cost us the match in the end. We gave players roles and they executed it really well. The way the crowds supported us, we enjoyed a lot as a team. We always enjoy playing here."

Australia will now face New Zealand in the summit clash of the T20 WC 2021 edition, to be held on Sunday evening (November 14) at the Dubai International Cricket Stadium, Dubai.