'Was very sad Sachin Tendulkar got out at 98, wanted him to slam ton against us': Shoaib Akhtar on 2003 World Cup match vs India 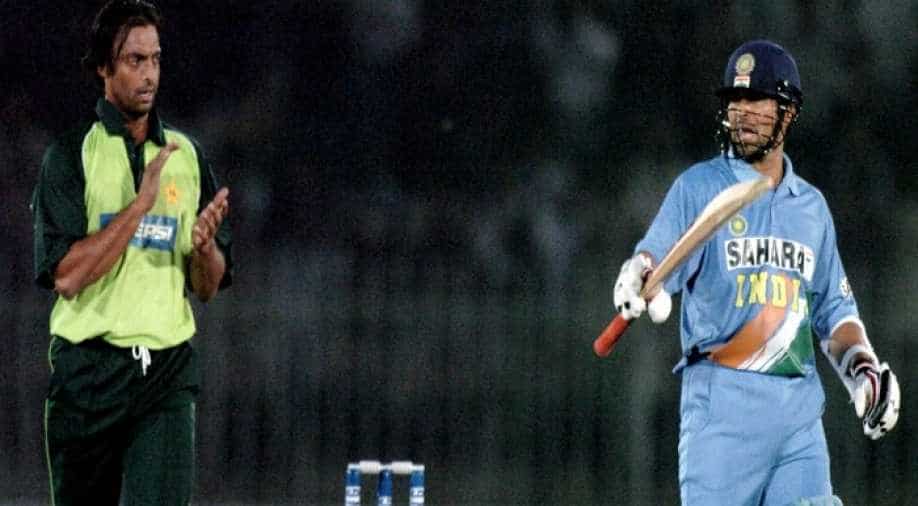 Shoaib Akhtar and Sachin Tendulkar during the 2nd ODI in Rawalpindi on 16 March 2004 Photograph:( AFP )

Former Pakistan speedster Shoaib Akthar has revealed that he was “very sad” after  Sachin Tendulkar got out at 98 in the 2003 World Cup match between India and Pakistan.

Former India cricketer Sachin Tendulkar’s smashing knock of 98 against Pakistan in the 2003 World Cup is regarded as one of the best innings of all-time. Pakistan bowlers were hammered all over the park by the Master Blaster before he ended up getting dismissed, falling two runs short of a memorable century. Former Pakistan speedster Shoaib Akthar, who was part of the iconic pace attack, has revealed that he was “very sad” as Tendulkar got out at 98.

Tendulkar, who was battling cramps while batting with a runner, was sent packing by Akhtar after a sharp bouncer got the better of him. Akhtar has said that he would have loved to see Tendulkar hitting him for a six in that bouncer which got him out. The former Pakistan pacer further said that it is unfair to compare Tendulkar with Kohli.

“I was very sad because Sachin got out for 98. It was a special inning; he should have touched the century mark. I wanted him to slam the ton. For that bouncer, I may have loved to see him hit a six, as he did it before,” Akhtar said during a live chat.

“Tendulkar batted in the toughest era of cricket. If he had to get the chance now, he may hit more than 1.30 lakh runs. So it’s not good to make a comparison between Sachin and Kohli,” Akhtar, a veteran of 46 Tests and 163 ODIs, said.

Earlier, Akhtar had revealed how his knee problem and poor captaincy from Waqar Younis led to Pakistan’s crushing defeat in the match against India despite posting a total of 274 runs, a challenging total in that era.

“The most disappointing match for me in my entire career was the 2003 World Cup match against India at Centurion. We had failed to defend a target of 274 despite having a very good bowling line-up,” said Akhtar.

ALSO READ: 'Chasing is a situation where...'- Virat Kohli reveals his mindset during run-chases

“After the end of our innings, I told my teammates that we have probably scored 30-40 runs less. However, all the players in the team shouted at me saying if ‘273 is not enough then what is’. They said we will be able to get India all out. However, I knew that the pitch was a good one for batting and it will remain so in the second innings as well.”

“It was a bitter experience for me because we could have defeated India, both in 1999 and 2003, but we couldn’t. Not to take the credit away from India who have played us exceeding well at the World Cups,” he further added.