Virat Kohli in awe of 83: Couldn't have relived most iconic moment of Indian cricket in a better manner 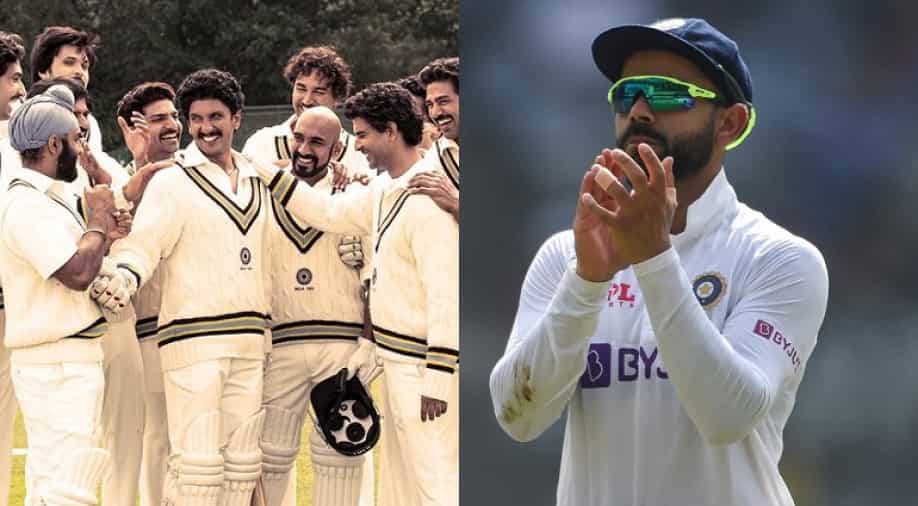 Indian skipper Virat Kohli has been left in awe of Ranveer Singh starrer '83' as he heaped praise on the actor and the makers after watching the much-anticipated film.

Ranveer Singh and Deepika Padukone starrer '83' has created a lot of buzz across the nation and has become the talk of the town. The much-anticipated film hit the theatres on Friday (December 24) and fans have been flocking the cinemas to relive one of India's most iconic victories in their cricketing history.

The star cast of the movie has already garnered a lot of praise for nailing their respective portrayal of the real-life heroes of India's 1983 World Cup heroes on the screen. While Ranveer is playing the legendary Kapil Dev who led underdogs India to their maiden World Cup triumph after defeating the mighty West Indies in the final, Deepika is playing Kapil's wife Romi Devi in the movie.

As reviews and appreciation messages continue to flow in for the makers and the actors of '83', Indian Test team captain Virat Kohli has also shared his review of the film. Kohli, who is currently in South Africa ahead of India's Test series against the Proteas, took out time to watch the film and heaped praise on Ranveer and others.

"Couldn't have relived the most iconic moment of Indian cricket history in a better manner. A fantastically made movie which immerses you in the events and the emotion of the world cup in 1983. Splendid performances as well," Kohli wrote in a tweet.

"@RanveerOfficial was a different level altogether. Great job everyone! @therealkapildev @kabirkhankk", he said in another tweet.

Couldn't have relived the most iconic moment of Indian cricket history in a better manner. A fantastically made movie which immerses you in the events and the emotion of the world cup in 1983. Splendid performances as well.

The 1983 World Cup win is one of India's greatest triumphs in the country's cricketing history. The Kapil Dev-led side were massive underdogs and had been written off by many in the build-up to the World Cup. However, India went on to defy all the odds and script their maiden World Cup triumph in the most comprehensive manner by beating favourites West Indies in the final by 43 runs.

Mohinder Amarnath was awarded the Man of the Match in the final for his all-round heroics. The legendary all-rounder scored 26 runs to help India post 183 runs on the board, batting first before picking up three wickets to help the team bundled out West Indies for 140 and secure a magnificent win for India.

'83' brings out pure joy and emotions as it showcases the journey of India's maiden World Cup triumph in a perfect way. The movie also brings out several unknown anecdotes and incidents that were part of India's journey to the glorious triumph at Lord's in 1983.