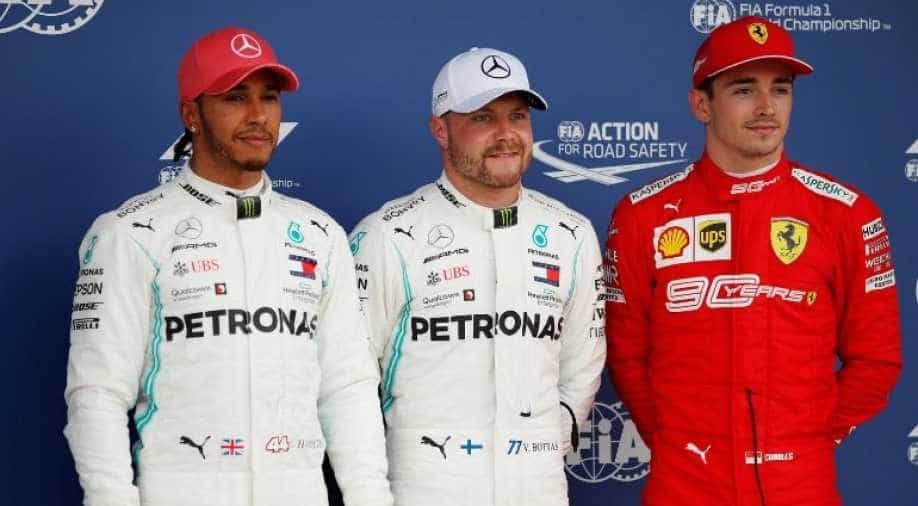 Valtteri Bottas beat crowd favourite and Formula One leader Lewis Hamilton by the blink of an eye on Saturday to deny his Mercedes teammate a fifth successive British Grand Prix pole position.

The Finn was a mere six-thousandths of a second quicker than the five-times world champion as the two Silver Arrows again locked out the front row of the grid on a cloudy afternoon at Silverstone.

Ferrari's young Monegasque Charles Leclerc will share the second row with Red Bull's Max Verstappen, who won the previous race in Austria where the two 21-year-olds clashed on track while fighting for victory in the closing laps.

The pole, in a track-record time of one minute 25.093 seconds, was Bottas's fourth in 10 races this season -- more than any other driver -- and his career 10th.

"Ultimately not good enough," said Hamilton, who was fastest in the first phase of qualifying but ran wide at Brooklands on his first lap of the final session.

"We worked really hard throughout the session but it just got a little bit away from us.

"I sacrificed a lap in Q2 (the second phase), which would have helped get a reading of how the car was. And then just at the end I had that mistake on the first lap and the second one just wasn't that great.

"Fair play to Valtteri, he did the job. But it’s a long race tomorrow and we’ve got a great crowd here so hopefully I can do something different."

Bottas is 31 points adrift of Hamilton in the championship and needs to close the gap, fully aware that his teammate has a habit of hitting full throttle once the August break is out of the way.

The Finn led after the first flying laps of the top-10 shootout and stayed there despite failing to improve on his time with the final run.

"I knew the first lap was good but it wasn't perfect and honestly I should've improved in the second run and I'm glad it was enough -- it's not easy to get a quick lap together and it's very easy to do mistakes," said the happy Finn.

Bottas has converted only one of his poles into victory this season and Hamilton still remains well-placed to delight his army of fans with a record sixth home win and 80th of his career.

A sellout crowd of more than 140,000 is expected to turn up on Sunday.

"I’ve had worse ones, at least I took part," said Vettel, whose team had ended the morning's final practice one-two on the timesheets and had Leclerc set the fastest time in the second phase of qualifying.

"I didn’t have a great feeling this afternoon and you need a great feeling to throw the car from one side to the other," added the German, who will start on the soft tyres while Mercedes have slower but more durable mediums.

Australian Daniel Ricciardo lines up seventh for Renault, alongside McLaren's Lando Norris after another fine performance by the British teenage rookie whose Spanish teammate Carlos Sainz was 13th.

"I think I can be reasonably happy with P8," said Norris, who also got plenty of cheers from the fans. "Not ideal, but it was good fun. It's an awesome track to do qualifying on. The whole weekend's been pretty nice so far.

"We're normally a bit better on Sundays than Saturdays."