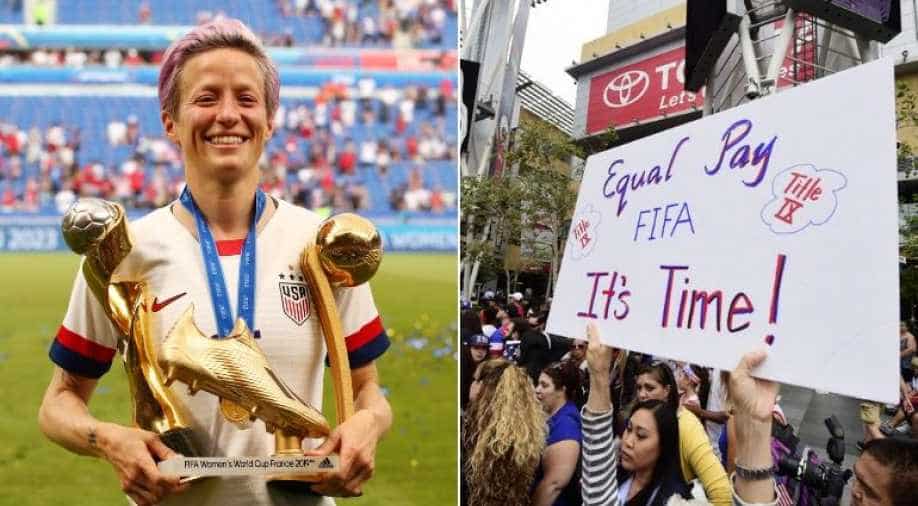 Throughout the tournament, fans demanded equal pay for the players with some of them even marching to stadiums with banners displaying 'equal play'

The women footballers of United States might have won the World Cup for a record fourth time but their off-field fight for pay equity continues.

Throughout the tournament, fans demanded equal pay for the players with some of them even marching to stadiums with banners displaying "equal play".

They even booed FIFA chief Gianni Infantino and French president Emmanuel Macron during the prize distribution ceremony after the final and gave a hero-like reception to the player of the match, co-captain Megan Rapinoe.

Some US websites reported that more than 50 members of Congress wrote to the national federation a few months ago saying that female football players receive a base salary of about $30,000 less than their male counterparts.

They also mentioned that they earn less bonus money for making it to the World Cup.

Amid a growing outcry over the pay disparity between the men's and women's players, Infantino said that he wants to expand the field of teams for the next World Cup in 2023 from 24 to 32 and double the prize money to $60 million. But so far he has not said anything about increasing the salary of women players.

The US women's football team salary depends on how well the squad does in the World Cup and few sponsors also pay according to the performance.

Ahead of the World Cup, Australia made a landmark decision to raise the women players’ salaries. This will see professional female footballers in the country earning the same minimum wage as their male counterparts.

Under a new collective bargaining agreement unveiled, the base annual pay for players in the W-League was hiked 33 per cent to Aus $16,344 (US$11,393).

IPL retention wrap: All you need to know about who is retained and who's not ahead of mega auction