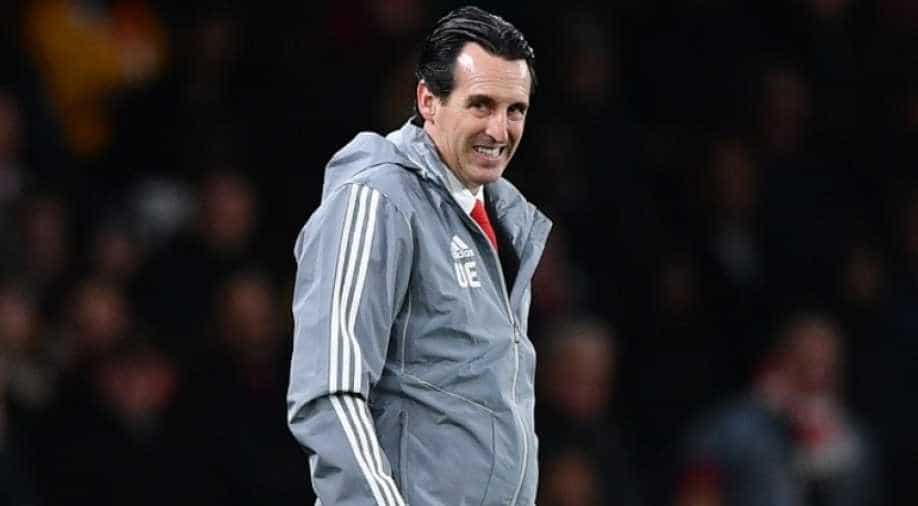 Arsenal are now winless in seven games, the club's worst run since 1992.

Unai Emery's future as Arsenal coach was plunged into further doubt on Thursday when the Gunners slumped to a 2-1 loss in the Europa League against Eintracht Frankfurt but the Spaniard said he did not fear for his job.

Arsenal are now winless in seven games, the club's worst run since 1992.

Emery shrugged off multiple questions regarding his position during the post-match press conference.

"Now our moment is not good. We need to win, take confidence and I think we are better than we are showing. The players, the coaches and myself," 48-year-old Emery said.

"I am thinking about the next match (against Norwich on Sunday) and how we can improve.

"My work and my job is firstly analysing that match, how we are in the Europa League, in our feelings and how we are going to play on Sunday."

Japan midfielder Daichi Kamada scored a second-half double for Eintracht after captain Pierre-Emerick Aubameyang had opened the scoring in first-half injury time for Arsenal inside a half-full Emirates Stadium.

Boos from the lowest attendance at the ground since it opened in 2006 greeted Emery and his misfiring team at the final whistle while some disgruntled fans held up banners demanding 'Emery Out'.

Aubameyang struck home just before the half-time whistle with a low effort for his ninth goal in 14 matches.

Kamada's equaliser came 10 minutes later as he curled a tidy shot past Emiliano Martinez before adding his second on 64 minutes with a drive from outside the box to inflict a first home defeat of the campaign on Emery's men.

The Gunners are still on course for a last 32 place if they draw with Standard Liege on December 12.

Scottish champions Celtic clinched top spot in Group E with a 3-1 win over Rennes while Wolves reached the knockout stages with a 3-3 draw at fellow qualifiers Braga in Group K.

Rangers drew 2-2 at Feyenoord to hold top spot in Group G with a one-point lead ahead of their last game against Young Boys.

Earlier, Roma's Lorenzo Pellegrini was hit by coins as the Italian club kept their last 32 hopes alive with a 3-0 victory at Istanbul Basaksehir.

Attacking midfielder Pellegrini had his head bandaged after he was struck by multiple coins with an hour of the game played after Jordan Veretout, Justin Kluivert and Edin Dzeko had claimed the advantage for the Serie A outfit in Turkey.

The visitors remain in contention for a knock-out spot and sit behind leaders Borussia Moenchengladbach, who beat Austrians Wolfsberg 1-0, on goal difference with the Turkish side a point behind on seven.

United captain Jesse Lingard opened the scoring, who had already reached the last 32, before Dmitri Shomko equalised for the home side.

Di'Shon Bernard, 19, then put through his own goal to hand Astana victory over a United side whose average age was just 22.

Solskjaer said some of the youngsters on show put their hands up to feature against Alkmaar in the final round of group matches on December 12.

"At times we were excellent but there were spells when we let them push us back. That cost us in the end," he said.

"These boys have learnt a lot and have given me food for thought. I'm very pleased with many of them."

Shomko, meanwhile, told UEFA.com the result will live in his memory.

"I will be telling my grandchildren, 'you know guys a while ago I scored against Manchester United'. It does not matter who scored, really. The most important thing is that we won," he said.