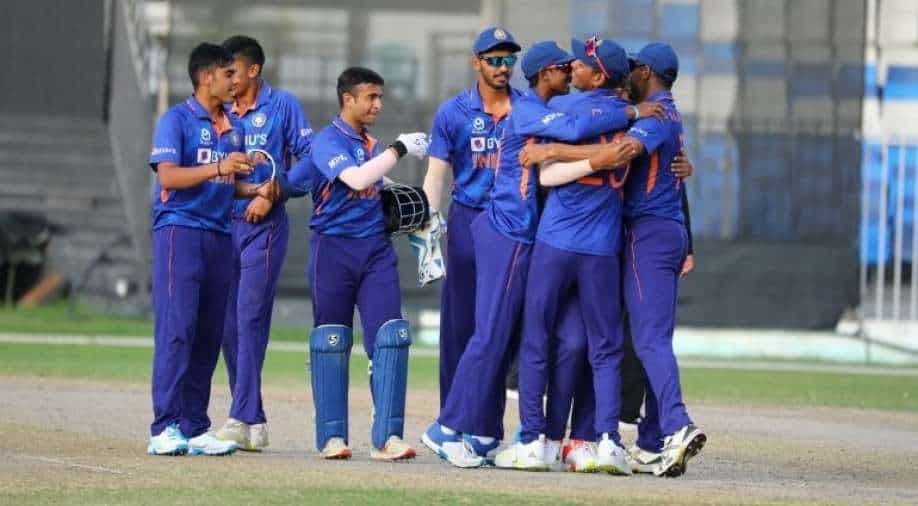 India will face Sri Lanka in the title clash in Dubai on Friday. Sri Lanka defeated Pakistan by 22 runs in another semifinal clash.

Shaik Rasheed hit an unbeaten 90 as India dished out a clinical performance to thrash Bangladesh by 103 runs here on Thursday and set up a summit clash with Sri Lanka in the Under-19 Asia Cup.

India U19 beat Bangladesh U19 by 103 runs in the semifinal and seal a place in the summit clash. 👌 👌#INDVBAN#BoysInBlue

One-down Rasheed made his runs in 108 balls to help India post 248 for eight after being invited to bat.

Rasheed paced his innings to perfection after India had lost both their openers -- Angkrish Raghuvanshi (16) and Harnoor Singh (15) -- inside the 50-run mark, in the 17th overs.

The Indian bowlers, then, produced a cohesive effort to bundle out Bangladesh for 140 runs in 38.2 overs.

Ariful Islam top-scored for Bangladesh with a 77-ball 42, while opener Mahfijul Islam made 26.

Bangladesh's chase never got going as the Indian bowlers picked up wickets at regular intervals, with only Ariful providing some resistance.

Earkier, the Indian openers found the going tough and it was only after their dismissals that the run rate started to improve.

India lost Nishant Sindhu (5) cheaply before Rasheed and skipper Yash Dhull (26 off 29) stitched 41 runs for the fourth wicket to stabilise the innings.

Raj Bawa (23), Vicky Ostwal (28 not out off 18 balls) and Rajvardhan Hangargekar (16) also played useful hands to provide Rasheed support from the other end.

Even though it wasn't an extravagant knock from Rasheed, he did enough to give the Indian bowlers a target to defend. He struck three boundaries and one six during his unconquered innings.

For Bangladesh U-19, left-arm orthodox spinner Rakibul Hasan was the pick of the bowlers with figures of three for 41 from his 10 overs.

India will face Sri Lanka in the title clash in Dubai on Friday.

Sri Lanka defeated Pakistan by 22 runs in another semifinal clash.

Sri Lanka made a modest 147 all out after opting to bat and then restricted Pakistan to 125.