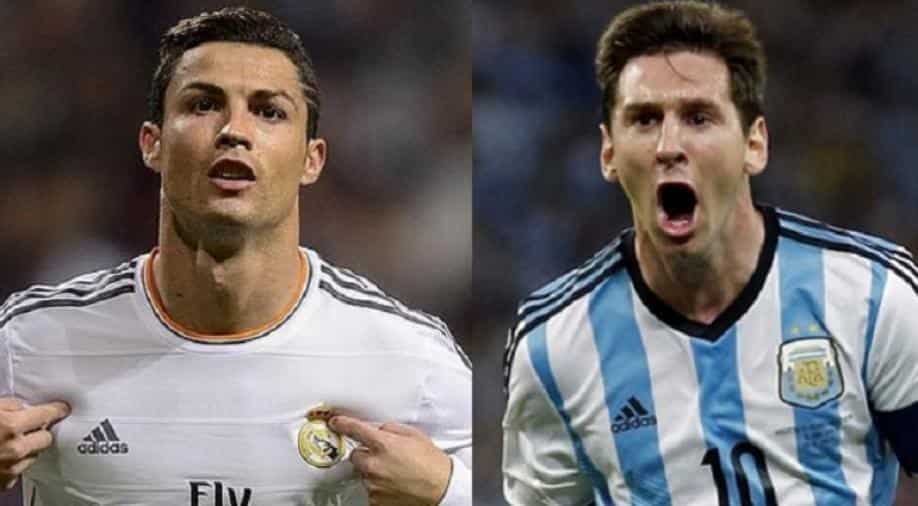 Messi and Ronaldo have been rivals for the past decade winning five Ballon d'Or trophies each before their domination was broken by World Cup runner-up Luka Modric last week.

Cristiano Ronaldo has urged long-time rival Lionel Messi to be more like him and push his limits by challenging himself in another league than Spain.

"I'd like him to come to Italy one day. I hope he accepts the challenge like me, but if he's happy there then I respect that," Ronaldo told the Italian press on Monday.

The two strikers have been rivals for the past decade winning five Ballon d'Or trophies each before their domination was broken by World Cup runner-up Luka Modric last week.

Asked if he missed the 31-year-old Argentinian, who has spent his entire senior career at Barcelona, Ronaldo replied: "No, maybe it's him who misses me ...

"I've played in England, Spain, Italy, Portugal and for my national team, while he's still in Spain.

"Maybe he needs me more... For me, life is a challenge, I like it and I like to make people happy.

"He's a fantastic player and a good guy, but I don't miss anything here. This is my new life and I'm happy.

"I left my comfort zone and took on this challenge here in Turin, everything has gone well, I've proven I'm still an incredible player," said Ronaldo.

Ronaldo joined Juventus for $114 million last summer as the Turin giants bid to lift the Champions League trophy after two runners-up finish in the past four seasons.

"I had different options. I won't say which but I had them. Juventus is a solid club. It has a long history," he said of his decision.

"I knew the atmosphere in the stadium. I'd played several times in Italy. I like the city, the people and the club. I knew it could work.

"I couldn't be 100 per cent sure I was joining the best club in the world. After nine years at Real Madrid it was difficult to compare.

Ronaldo has scored 11 goals this season, bringing his career total to 584.

"Of course I'm disappointed, but life goes on and I will continue to work hard," said the 33-year-old.

"On the pitch I've done everything to win the Ballon d'Or, numbers do not lie, but I'm no less happy if I do not win, I have wonderful friends and a family, I play in one of the best clubs.

"Congratulations to Modric, who has earned the award, but next year we will meet again and I will do everything to win the prize again.

"Do you think I'm going home and crying?"

Juventus play Young Boys in their final Champions League group game in Switzerland on Wednesday, having already booked their place in the knockout rounds.

And Ronaldo is hoping his experience of winning the trophy five times can serve his new team.

"The Champions League cannot be an obsession, you have to think about it calmly," he warned.

"Yes we all want it but we have to get there step by step.

"Look at the game against Manchester United (2-1 defeat), if it had been a quarter-final we would have gone out. You need a little luck."