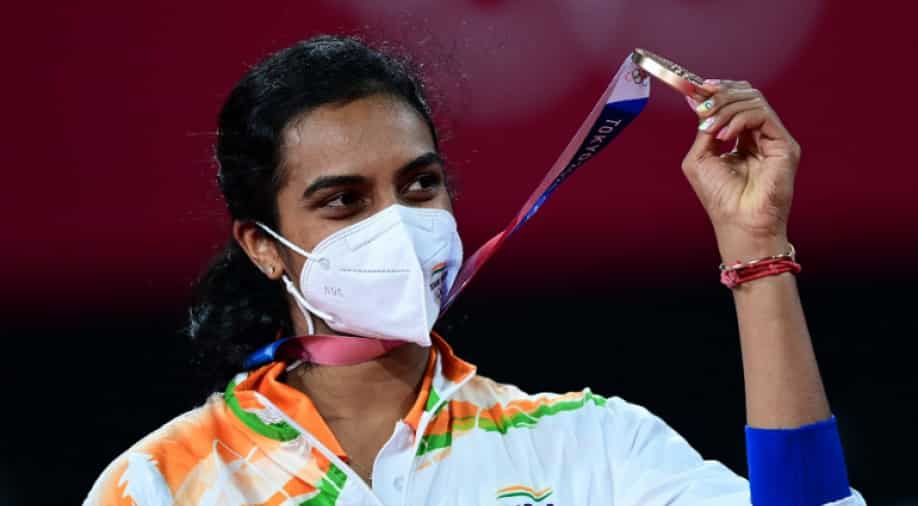 Celebratory messages poured in as P V Sindhu crushed China's He Bing Jiao to win the bronze award in women's badminton singles at the Tokyo Olympics. She is the first Indian woman to win two individual awards at the Olympics.

Commending the shuttler's exhibition, Prime Minister Narendra Modi said Sindhu is "India's pride". "We are all elated by the stellar performance by @Pvsindhu1. Congratulations to her on winning the Bronze at @Tokyo2020. She is India's pride and one of our most outstanding Olympians," he tweeted.

We are all elated by the stellar performance by @Pvsindhu1. Congratulations to her on winning the Bronze at @Tokyo2020. She is India’s pride and one of our most outstanding Olympians. #Tokyo2020 pic.twitter.com/O8Ay3JWT7q

Addressing the media after PV Sindhu's triumph, her father P V Ramana said the Prime Minister had revealed to her that he will have ice cream with her if she wins a medal.

"Now Sindhu will now have ice cream with PM Modi," he said.

"The encouragement PM Modi had given to her, he had said, 'you go, we will have ice cream when you come back,' so she will now definitely go and have ice cream with the Prime Minister," he added.

"I am happy that she is the first Indian woman to win two consecutive medals at the Olympics. She has brought name and fame to the country," PV Ramana said.

"Sindhu is focused and she has that hunger. She enjoys the game," he added.

He said that while he was confident that she would win the gold medal, winning the bronze is likewise a colossal accomplishment.

"Whenever she has gone (to the Olympics), she has brought a medal. She went the last time, she won a medal and she has done it this time too," he concluded.