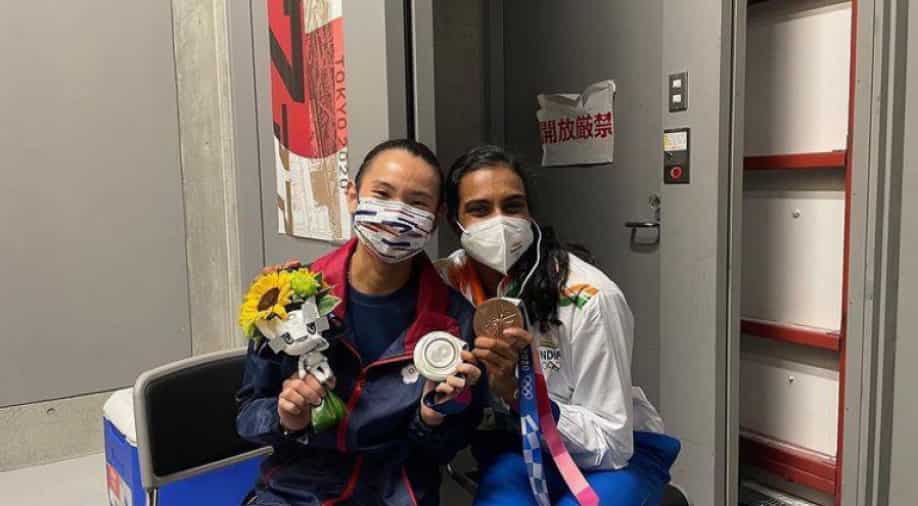 'Sindu ran over and hugged me, held my face, and told me: I know You're very sick, you're already doing well, but today isn't your day,' Tai Tzu Ying wrote

World no.1 Tai Tzu-Ying of of Chinese Taipei and China's Chen Yufei partook in an intense clash in the badminton women's singles final at the Tokyo Olympics 2020 on Sunday. Yufei secured the subtle gold medal after defeating Tai 21-18 19 21-18 in the culmination clash.

It was a mind-boggling show of attacking badminton from both shuttlers, who delivered some dazzling crushes and impeccable net-play.

Tai needed to settle with the silver medal after winding up on the second right on target the platform at the Tokyo Games.

ALSO READ: Tokyo Olympics: 'I had to close off my emotions,' says PV Sindhu after bronze-medal win

She posted an emotional post on her final loss and uncovered how Indian star PV Sindhu imparted a few uplifting words to her after the medal ceremony. In an Instagram post, Tai said PV Sindhu hugged her and revealed to her she did very well in the final.

The world no.1 shuttler proceeded to add that PV Sindhu's true support made her cry after the final.

"After the game, I was still satisfied with my performance. Later, Sindu ran over and hugged me, held my face, and told me: I know You're very sick, you're already doing well, but today isn't your day," she wrote

"Then she held me in her arms and said: She knew it all. That sincere encouragement, made me cry really sad because I tried really hard. Thank you again for your support and encouragement. Thank you all for walking with me till now," she added.

27-year-old Tai is a standout amongst other shuttlers in the world as of now however is yet to win a gold medal for her country at the Olympics. However, being only 27, she has in the past indicated that she may retire early. Although, she has received astounding support from badminton fans across the world regardless of her loss.

The 27-year-old Tai Tzu wrote down a passionate note, expressing gratitude towards every individual who has upheld her.

"The third time I stepped on the stage of this dream, I finally made it to the finals, but I couldn't stand on the highest podium. There is always a little regret, but imperfection always exists, only to be motivated to pursue better results."

"Maybe I won't have another chance to participate in the Olympics, but I've achieved this goal, just not so perfect.

"I just want to tell myself: Dai Ji-hing, you're great! Thank you to all of you who have supported me, the results are always brutal and only acceptable but I try my best."

Sindhu crushed China's He Bing Jiao 21-13 21-15 in the bronze medal match on Sunday to expand her strength at the Olympics. She turned out to be just the second Indian athlete after Sushil Kumar to sack consecutive Olympic awards.