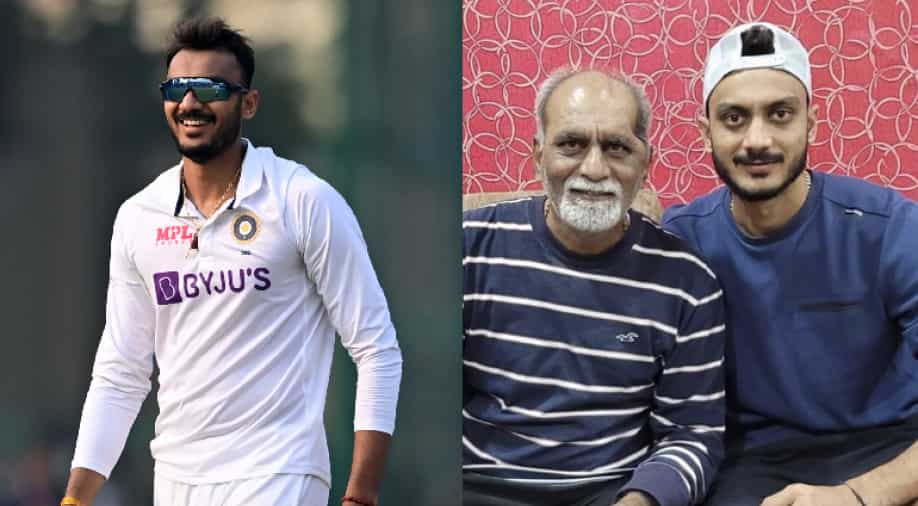 Axar Patel dedicated his five-wicket haul to his father on his birthday. Photograph:( AFP )

Indian spinner Axar Patel picked up a five-wicket haul against New Zealand on Day 3 of the first Test on Saturday and dedicated the feat to his father on the latter's birthday.

Axar Patel continued his fine form with the ball for Team India on Saturday as he ran through New Zealand batting line-up on Day 3 of the onging first Test between the two sides in Kanpur. Axar bagged a five-wicket haul and finished with excellent figures of 5/62 as India bundled out the Kiwis for 296 runs in their first innings.

Resuming their first innings from 129/0, New Zealand could only add 22 runs on the board in the first session Day 3 before R Ashwin drew the first blood for India by getting rid of Will Young on 89. Umesh Yadav then sent Kane Williamson packing cheaply before Axar removed the likes of Ross Taylor, Henry Nicholls and Tom Latham in quick succession to leave the Kiwis reeling on 227/5.

Axar also bowled well economically and conceded only 1.82 runs per over while continuously troubling the visitors with his spin. The left-arm spinner dedicated his five-wicket haul to his father on the latter's birthday which was incidentally on Saturday.

Axar took to Twitter to share a picture with his father and wrote - "Number 5. Thanks everyone for the messages. This one's for my hero. Happy Birthday Dad," he captioned the post.

Thanks everyone for the messages. This one's for my hero.
Happy Birthday Dad pic.twitter.com/xzlemXFXKH

New Zealand's batting line-up fell like a pack of cards on Day 3 as the Indian spinners ran riot. While Axar picked up his fifth five-wicket haul in the last seven matches, Ashwin too bowled well and finished with figures of 3/82. The duo picked up eight wickets between them to hand a handy 49-run lead heading into their second innings.

However, India got off to a poor start in their second innings as they lost opener Shubman Gill cheaply on just 1 off 3 balls. Kyle Jamieson cleaned up Gill to become the fastest bowler from New Zealand to reach fifty Test wickets. India ended Day 3 on 14/1 with a lead of 63 runs.