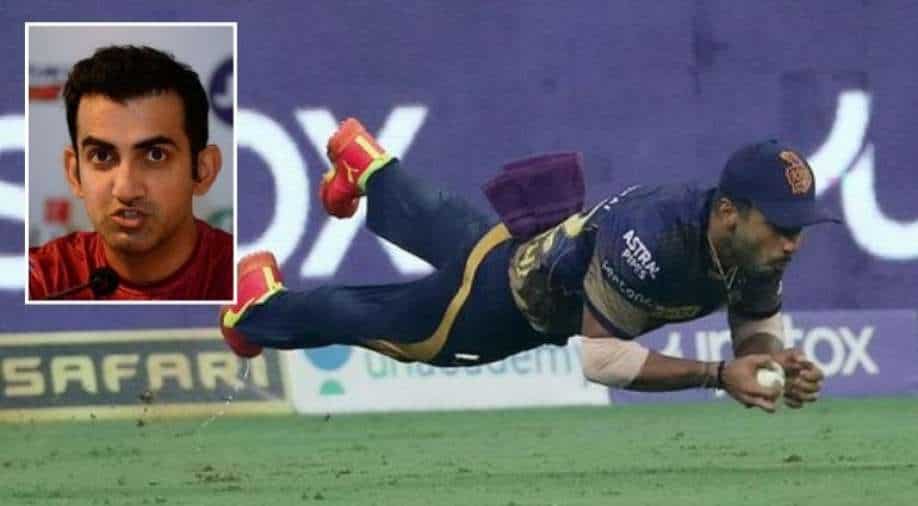 After not being given out, KL Rahul finished with a score of 67 off 55 balls and led PBKS to a 5-wicket win and 2 crucial points

Former Kolkata Knight Riders captain Gautam Gambhir slammed the third umpire after a crucial catch by Rahul Tripathi was not given in KKR's favour during their IPL 2021 match against Punjab Kings on Friday (October 1).

In match 45, KL Rahul-led Punjab Kings registered a five-wicket win over Eoin Morgan's KKR, but it is believed that the catch, which was given 'not out' by the third umpire, could have altered the final result of the clash.

During the match, Punjab required 11 off 10 balls for victory when KL Rahul played Shivam Mavi's delivery towards the mid-wicket boundary, where KKR fielder dived forward to take a "classy" catch.

However, the on-field umpires were uncertain and referred it to the decision upstairs to get clarity at a very crucial stage of the match.

Third umpire Anil Dandekar, after consulting several camera angles and watching the clip in slow motion, declared the batter not out.

"That was a shocker, this can end someone's campaign. He shouldn't have seen the replay more than once, it just looked out. Even if they had got KL Rahul out, things would have been different. We cannot have these kinds of shockers in the IPL," Gambhir said on Star Sports.

Ex-England spinner Graeme Swann also lashed out at the decision as he was quoted as saying, "That was the worst piece of third umpiring I have ever seen."

After the match, Morgan while speaking during the post-presentation said the catch by Tripathi looked clean "in real-time".

"Initially we didn't field as well, put catches down. Myself early too. We probably had a par score on the wicket. Kings played well, we fought back, but catches have cost us. I thought in real-time that the Tripathi catch was out," said Morgan.

"But when you slow it down, the third umpire decided otherwise. We got on with it once he made his call. Hopefully, we play hard in the back end, get a few results and qualify into the playoffs," he added.

After not being given out, KL Rahul finished with a score of 67 off 55 balls and led PBKS to a 5-wicket win and 2 crucial points.