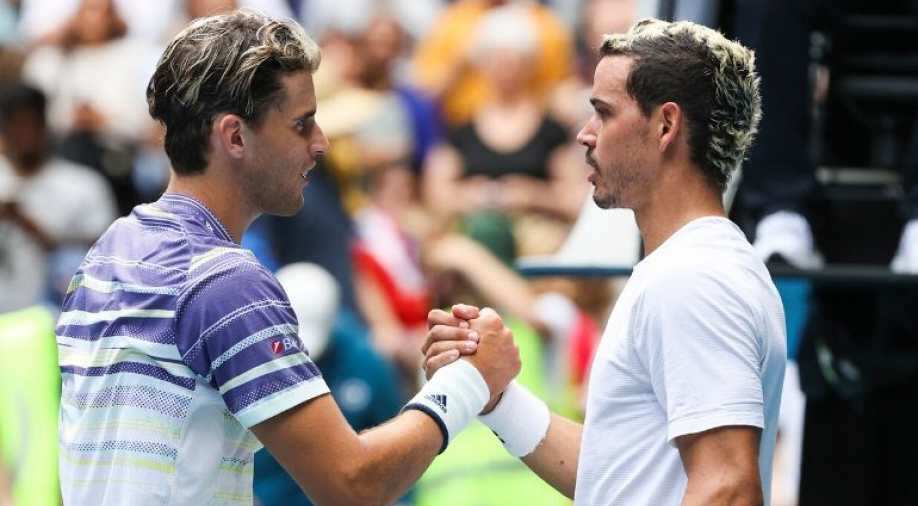 Austria's Dominic Thiem (L) shakes hands with Australia's Alex Bolt at the end of their men's singles match on day four of the Australian Open tennis tournament in Melbourne on January 23, 2020. Photograph:( AFP )

The third set was a tight affair with neither player giving an inch. Thiem had an opportunity at 4-4 with two break points but he failed to convert.

Thiem is among a clutch of players tipped to win a Major after reaching the last two Roland Garros finals, but he was exposed at times by a player ranked 140 who controlled much of the second and third sets.

"Instead of that, he raised really his level. The crowd got it going.

"It was all of a sudden a really tight third set that shouldn't happen. That's why I was freaking out inside and also outside today."

Thiem, who has never gone past the fourth round in six previous attempts, ultimately came through to set up another tricky clash in the third round, against either American 29th seed Taylor Fritz or big-serving South African Kevin Anderson.

He looked comfortable after racing through the opening set and was serving at 5-4 to go two sets in front. But the crowd was roaring for Bolt and he remarkably broke, with the tide turning as he rallied to clinch the set 7-5.

Down Under Underdog 🐶@abolt15 has Melbourne Arena rocking as he keeps the set even at 4-4.#AusOpen | #AO2020 pic.twitter.com/P0f1IV5pXK

The third set was a tight affair with neither player giving an inch. Thiem had an opportunity at 4-4 with two break points but he failed to convert.

The Austrian's best efforts were being met with resistance, with Bolt saving another three break points on his next service game, leaving Thiem frustrated at his missed opportunities.

It went to a tiebreaker and Bolt raced into a 6-2 lead but wobbled as Thiem won three points in a row before the Australian sent down a booming ace to got two sets to one in front.

However, Thiem recovered his composure and after a series of long-baseline, rallies broke twice to take the match into a deciding set.

The Austrian's focus and fitness proved decisive in the fifth, with a Bolt forehand into the net giving him a break and he raced to victory as his opponent flagged.

Thiem insisted that playing five sets in the second round would not hurt his chances in Melbourne.

"It was nice conditions, was not hot," he said. "There's a big difference if you play three hours 20 (minutes) in these conditions or if you play four-and-a-half when it's 40 degrees outside."