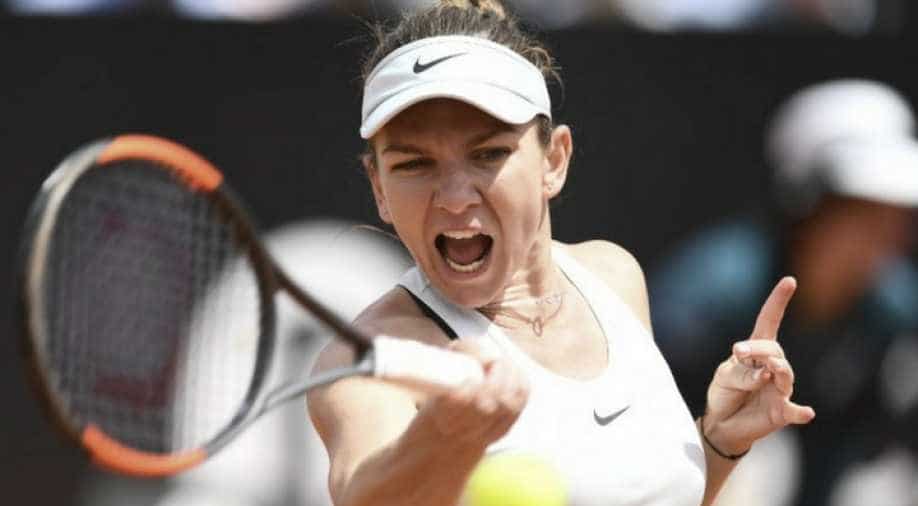 Sixth seed Thiem -- who inflicted the first clay-court defeat in almost a year on Rafael Nadal last week in Madrid -- smashed his racket in fury on his way to losing to Italy's Fabio Fognini 6-4, 1-6, 6-3 in just over two hours.

Fognini, ranked 21, kept his nerve while Thiem took out his frustration on his racket after handing his rival three match points, the&nbspItalian&nbspthen sealing his first win in three meetings with the Austrian.

"It was an intense fight. He was pumped today and playing at home and coming off a good win over (Gael) Monfils," said Thiem.

"If you compare it to Madrid there were a lot of close matches I could have lost there too. I did have chances."

Earlier, Halep powered her way to a 6-1, 6-0 win in just under an hour on the clay of the Italico Foro to claim her fourth win over 21st-ranked Osaka in five meetings.

"It was one of those helpless feeling," conceded Osaka who could be heard saying "I want to cry" courtside.

The match looked set to be a battle after Halep needed to save four break points in her opening service game for 1-1 but then reeled off 12 in a row to avenge her Indian Wells loss.

"I like to slide on the clay and today was easy for me. I'm more relaxed than in Madrid," said Halep.

Osaka, 20, failed to convert any of her six break point opportunities, hitting 29 unforced errors to Halep's 14.

The 26-year-old Halep reached the final in Rome last year and needs to reach the quarter-finals this time to hold her world number one ranking.

"It's just like one of those moments, like, you're a little bit depressed, and stuff. But I think this is the first match of the year that I've felt like this," insisted Osaka, who struggled with her backhand.

"She knew it and we were having a lot of backhand rallies, other than that I couldn't say what happened.

"I feel like I've played her the most of any player, this was the third time this year. She has a very solid game plan for me."

Halep is building towards the French&nbspOpen&nbspin two weeks time where she hopes to claim a first Grand Slam after twice finishing runner-up in Roland Garros.

France's Caroline Garcia, a semi-finalist in Madrid last week, also eased into the third round past Hungary's Timea Babos 6-3, 6-4.

Garcia, the seventh seed, went through with a break in both sets in 1hr 30min and she will next play either American Sloane Stephens or Kaia Kanepi of Estonia.