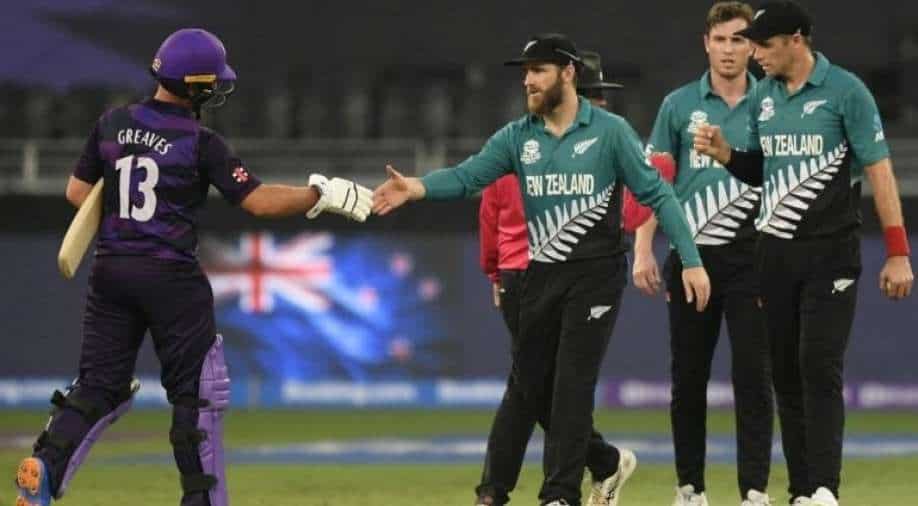 New Zealand won their second crucial match in Group 2 during the Super 12 stage and have kept their semi-finals hopes alive.

Opener Martin Guptill smashed a quickfire 93 to set up New Zealand's 26-run win over Scotland in their Group 2 during the Super 12 match of the T20 World Cup on Wednesday (November 2), at the Dubai International Cricket Stadium, Dubai.

The swashbuckling right-hander continued his good form as he hit six fours and seven sixes during his 56-ball innings as New Zealand posted 172 for 5 after being invited to bat. Glenn Phillips contributed 33 off 37 balls.

For Scotland, Safyaan Sharif was the most successful bowler with figures of 2/28. Chasing 173, Scotland could only make 156 for 5 in 20 overs with Michael Leask top-scoring with 42. For New Zealand, Trent Boult and Ish Sodhi two wickets apiece.

New Zealand captain Kane Williamson said in the post match conference, "We certainly knew coming into this tournament that there were match-winners all around. It ebbed and flowed and we got a good first innings total. We were patchy with the ball but we need to move on. Credit to Scotland for the way they played and hit the ball out of the park.We were tested and we need to learn from this. Guptill is a power player. He is hitting the ball beautifully. We really needed his innings. Also Glenn Phillips, and that partnership was necessary to get us to a good total."

"A quick turnaround now, recover as quickly as possible for the next challenge. There are always things to work on, and there are definitely a few things we want to touch on. We need to adjust quickly to surfaces. It was a hard fought match. We will go to Sharjah and take it from there. Every game is valuable and we know we try and prepare as well as possible for all of them. The next game is the only game that matters. For us it is all about playing the cricket we want to play and stay committed to that," Williamson added.

On the other hand, Scotland skipper Kyle Coetzer said, " We will have to go back and look at those opportunities that we couldn't take, the next little step and keep them under pressure. We picked up a couple of quick wickets at the back end of the powerplay. Maybe that's something we need to look at. They controlled the innings well, Martin Guptill played an outstanding knock. This is the best pitch we have played on thus far. If you restricted another 10 runs, the game could have been different. Often I don't like to keep bowlers bowling more than 2 overs in T20 cricket. It's about trying to change the pace and try and not let the batter to settle against set bowlers."

"That was the idea there to chop and change as much as you can. Mark Watt was excellent again today. Greaves was unlucky. There were opportunities. We need to look back at those. Mark is very confident at the moment. Trusts himself to use the crease, the depth, the angles. He backs himself to nail any of the deliveries he is looking to bowl. This is our best performance in the Super 12, but we have to go back and see. We were actually a couple of runs ahead of NZ at the 10-over mark. We have to try and extend the game. Leask got us close. Ultimately we left that gap too big," Koetzer added.

New Zealand and Afghanistan remain strong contenders to become the second side from Pool B to enter the semi-finals. Pakistan have already confirmed their slot in the semi-finals. However, Williamson & Co. will be eager to improve their all-round performance and notch up two big wins to enter the last four and build some momentum to win the coveted title.