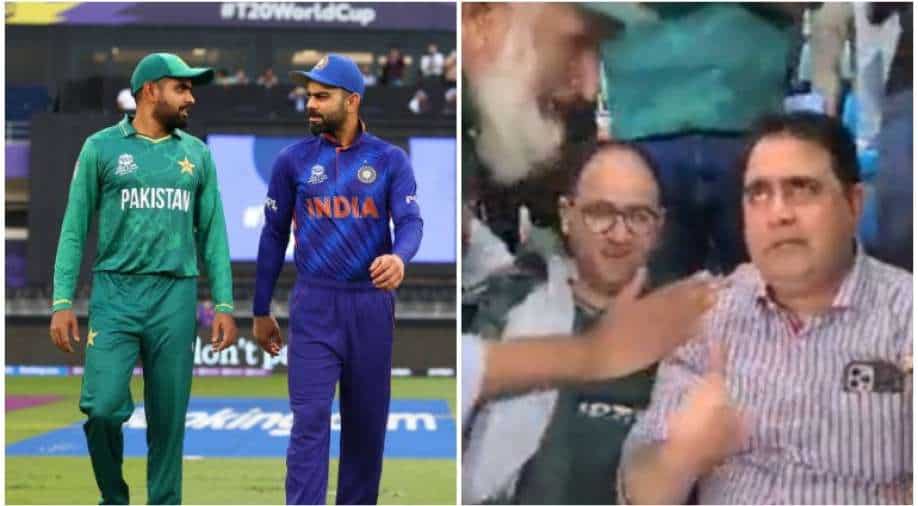 T20 World Cup: In a video shared on Twitter, Babar's father -- Azam Siddique -- was surrounded by the Pakistani supporters as he was in happy tears after the Men in Green hammered India by 10 wickets. Here's the clip -

India and Pakistan played each other in what was both sides' respective tournament-opener in match 4 of the Super 12 round in the T20 World Cup 2021, in the UAE. While the Virat Kohli-led Men in Blue were coming into the game on the back of a 12-0 unbeaten streak versus their arch-rivals in World Cups (both ODIs and T20Is), the Babar Azam-led Pakistan side produced a clinical performance to outplay the Indian team in all departments and win by 10 wickets on Sunday evening (October 24).

This way, Pakistan also managed to finally break their India jinx in World Cups as the whole country is basking in the glory of their national men's cricket team. After the match, Babar & Co. were ecstatic whereas the Pakistan captain's father was teary-eyed as his son marshalled his troops brilliantly to upset India. In a video shared on Twitter, Babar's father -- Azam Siddique -- was surrounded by the Pakistani supporters in the stands as he was in happy tears, was consoled and greeted by his countrymen, at the Dubai International Cricket Stadium, Dubai. Here's the video:

Winning the toss, Babar-led Pakistan invited India to bat first. The one-time winners India were off to a disastrous start as they lost Rohit Sharma and KL Rahul for cheap. Virat Kohli's 57 steadied the ship for India but the 32-year-old didn't get much support from others. Rishabh Pant and Suryakumar Yadav got starts as India rode on Kohli's fifty to post 151-7. Pakistan pacer Shaheen Afridi starred with the ball, returning with 3 for 31.

In reply, Babar and Mohammed Rizwan's unbeaten fifties (68 and 79 not out, respectively) took Pakistan to a stunning 10-wicket win over India. At the post-match presentation, Babar said, "This was the team's effort, and the early wickets were very helpful. It gave us a lot of confidence and our spinners were very good as well. We applied our plans and got the results. We, the openers, kept it simple and built a partnership and because the wicket was getting better so we just wanted to keep batting till the end, which we did. It won't get easier just because we beat India. We will take the confidence, but we're taking it one match at a time, and there's a long way to go in the tournament."