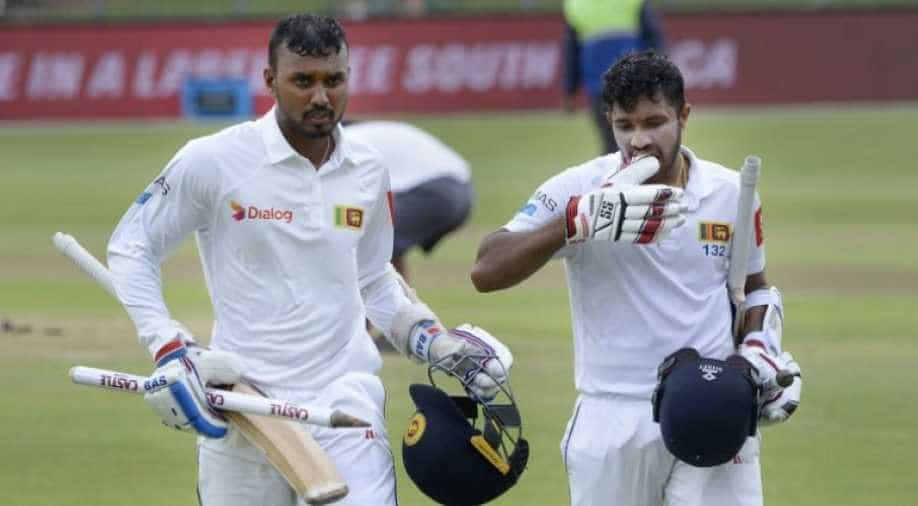 Sri Lanka's Oshada Fernando (L) and Kusal Mendis walk back to the pavilion after victory in the second Test cricket match against South Africa. Photograph:( AFP )

Sri Lanka were able to blast their way to a one-wicket victory in the first Test in Durban thanks to a remarkable unbeaten 153 from Kusal Perera in the second innings, they looked the more confident and assured team in the second match, cruising to an eight-wicket win

Sri Lanka's historic 2-0 Test series victory over South Africa had seemed somewhat fanciful when they arrived in some disarray and on a long losing streak, but leave as the first Asian side to win a series in the country.

South Africa had whitewashed Pakistan 3-0 at the start of the year and were on a run of seven home Test series wins in a row, dating back to 2016.

Sri Lanka, meanwhile, had been whitewashed 3-0 at home by England at the end of 2018 and then axed captain Dinesh Chandimal after losing successive away series in New Zealand and Australia - during which they lost three out of the four Tests contested.

In South Africa, they were missing injured talisman Angelo Mathews and had coach Chandika Hathurusingha reportedly at odds with his own board after being removed as an on-tour selector.

Hence it was little wonder that a buoyant and confident South Africa were odds on to secure a comfortable win.

But after Sri Lanka were able to blast their way to a one-wicket victory in the first Test in Durban thanks to a remarkable unbeaten 153 from Kusal Perera in the second innings, they looked the more confident and assured team in the second match, cruising to an eight-wicket win on Saturday.

Dimuth Karunaratne, captaining the team in the series, said the disappointing tours in Australia and New Zealand had laid the platform for their success in South Africa.

"Those two tours were really tough and we learnt a lot of things," Karunaratne said. "After that I think the players wanted to do something better for the team and for themselves as well.

"They realised quickly what to do and what not to do (in South Africa), stuck to the basics and started to enjoy their game.

"I want to tell the younger players especially that they did really well. They all put their hands up at different times and did a really good job for me."

Sri Lanka won the series despite first innings scores of 191 and 154 in the two Test matches, after which the South African batsmen could not capitalise on good batting wickets.

"The only concern for me is first innings batting, so we have to make sure that we do better," Karunaratne admitted. "All the time we were behind the game but we came back hard. The bowlers did a great job to keep us in the game."

Karunaratne admitted the enormity of their achievement was just setting in.

"It’s a great feeling for me and the team. It’s not easy when you come to South Africa, so to win the series 2-0 is brilliant.

"It’s been a lot of hard work, but the guys did really well and enjoyed it a lot, which is why I think we created history."