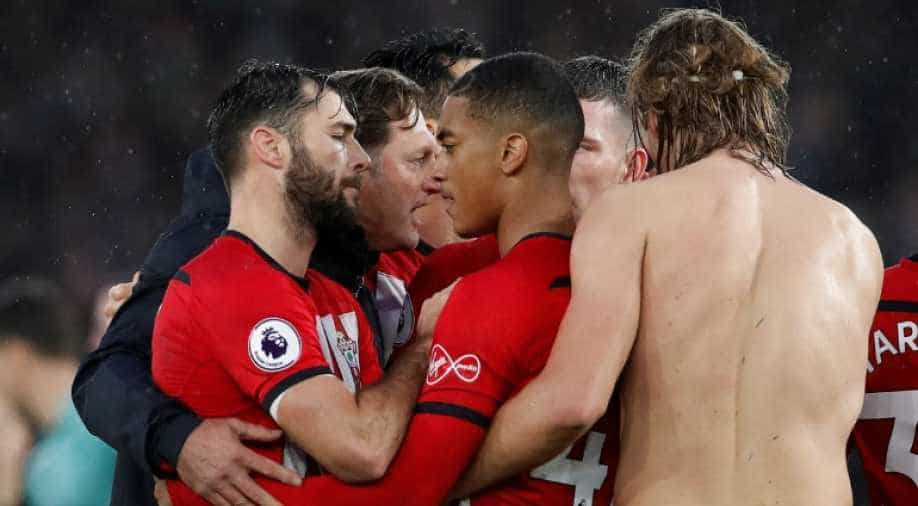 Southampton manager Ralph Hasenhuttl celebrates with Charlie Austin and teammates at the end of the match. Photograph:( Reuters )

It was the Londoners' first defeat in 23 games and meant they lost ground on fourth-placed Chelsea.

It was the Londoners' first defeat in 23 games and meant they lost ground on fourth-placed Chelsea, while Southampton moved out of the bottom three.
Danny Ings, back after injury, headed two fine goals in the first half from equally good crosses by Matt Targett and Nathan Redmond.

In between, Mkhitaryan drew Arsenal level with a header of his own and early in the second half he scored via a big deflection.

Yet in the 85th minute Austin, who had come on for the tiring Ings, headed in a cross by Shane Long.

The first win in 13 league games since Sept. 1 sent Southampton above Burnley into 17th place while Arsenal, who had last lost to Chelsea in the Premier League in August, remained fifth in the table.

Unai Emery's team had Laurent Koscielny starting in defence for the first time this season but they were uncertain at the back from the first to last minute against a side that at one stage this season went five league games without scoring.

Koscielny was at fault in failing to cut out Targett`s cross from the left and losing Ings, who scored his first headed goal for three years.

The visitors briefly looked more composed and drew level when Nacho Monreal cut back a cross for Mkhitaryan to head in, and a minute later Pierre-Emerick Aubameyang was only denied by a late interception from Jan Bednarek.

Southampton went ahead again, however, before the interval. Redmond supplied the chance with a neat chip and once again Ings eluded his marker to score.

So Arsenal maintained their dismal record of never having been ahead at halftime in the Premier League this season.

As a consequence, Emery made one of his regular halftime substitutions in sending on Alexandre Lacazette for wing back Hector Bellerin, and Aubameyang almost equalised within a minute.

Mkhitaryan`s second goal was fortunate in the extreme, his shot taking a big deflection off Jannik Vestergaard to leave goalkeeper Alex McCarthy helpless.

Long, replacing Redmond, had a goal rightly disallowed for offside but then picked out Austin with a cross that goalkeeper Bernd Leno failed to deal with.

"As a club we know the position we`ve put ourselves, and with the squad we've got it's not good enough," said Ings.

"But if we keep showing resilience and hard work we can turn it round. It shows we're moving in the right direction already."

Arsenal's Alex Iwobi said his side had not concentrated sufficiently and not defended well enough as a team.

"We're frustrated the unbeaten run is over," he added.

"We had chances to win the game. But we should give ourselves some credit for going on the run."