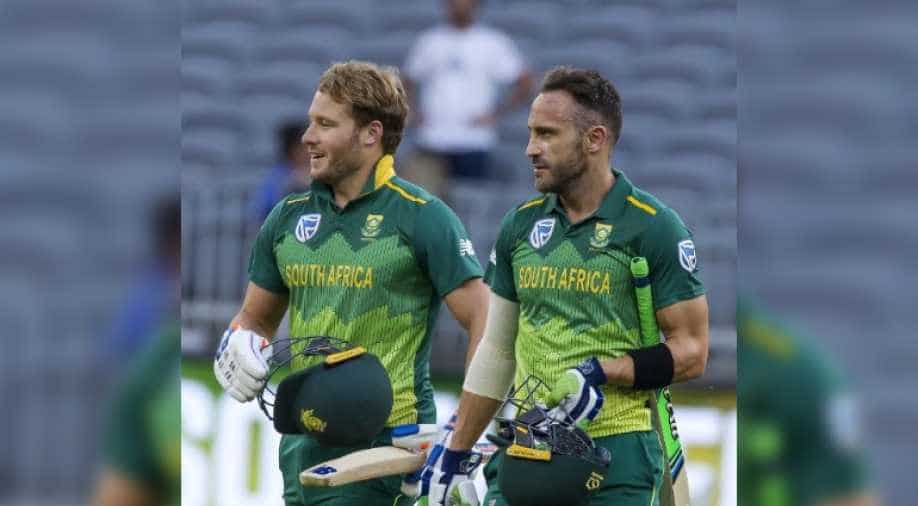 De Kock and Hendricks raced to a 94-run partnership before Coulter-Nile made amends on his return, having de Kock caught at mid-off going for another big hit.

South Africa hammered a careless Australia by six wickets in the first one-day international in Perth on Sunday, with a Dale Steyn-led pace onslaught exposing their batting frailties.

Set 153 to win, Proteas' openers Quinton de Kock (47) and Reeza Hendricks (44) helped secure victory with 124 balls to spare, leaving Australia with plenty to ponder ahead of the second of the three-game series in Adelaide on Friday.

The hosts came into the clash having lost 16 of their past 18 ODIs and with the reverberations of a ball-tampering scandal this year still hanging over them.

Coach Justin Langer was hoping they could put a smile back on the faces of fans in their first game on home soil since the cheating row boiled over in March.

But without the banned Steve Smith and David Warner, their batsmen were exposed once again in a stadium full of empty seats.

They were bowled out for just 152 in 38.1 overs with Nathan Coulter-Nile (34) and Alex Carey (33) the only ones to offer any resistance. Veteran Steyn took 2-18 off seven overs while Andile Phehlukwayo picked up 3-33 off six overs.

"We were a bit careless at times in the first innings. We were off the mark slowly.

"If you're defending 152, then nothing can go wrong with the ball. Unfortunately for us, Quinton and Reeza got off to a flier, and there was little we could do from there."

His opposite number Faf Du Plessis praised his team as "exceptional" with the ball and in the field.

"There was some counter-punching at the end, but a good day at the office overall," he said.

"All the bowlers today were great. It's great as a captain to have such X-factor in the bowling attack and they made sure to take advantage of the conditions."

The Proteas won the toss and after opting for a four-pronged pace attack chose to bowl, with Steyn getting two early breakthroughs.

Travis Head got a thick edge to de Kock off the veteran for just one and then D'Arcy Short, in the side for Shaun Marsh who needs minor surgery on an abscess, followed him back to the pavilion for a duck two balls later.

Bowlers lead the charge as visitors register comprehensive six-wicket win over Australia in the first #AUSvSA ODI in Perth.

Finch, who can be explosive when in full flight, totally misjudged the bounce from a Lungi Ngidi delivery and was out lbw soon after for five.

He mistakenly opted not to review with Australia floundering at 8-3 as replays revealed the ball would have gone over the stumps.

The first four of the innings, from Chris Lynn, didn't come until the 12th over, and he was caught behind for 15 on review not long after.

Carey kept the scoreboard slowly ticking over but he fell attempting to scoop an Imran Tahir ball over the head of de Kock before some late fireworks from Coulter-Nile took them past 150.

Australia were buoyant ahead of the game with injured fast bowlers Mitchell Starc and Pat Cummins returning to spearhead the attack alongside Josh Hazlewood.

But they failed to emulate their South African counterparts.

Finch bizarrely opted to open the bowling with Coulter-Nile instead of Starc. He was smashed for 16 in his first over before being removed.

De Kock and Hendricks raced to a 94-run partnership before Coulter-Nile made amends on his return, having de Kock caught at mid-off going for another big hit.