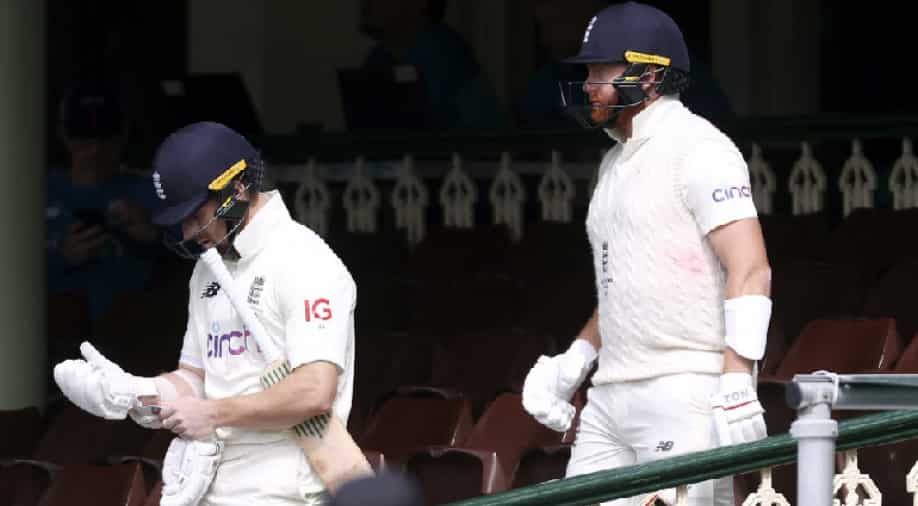 Ben Stokes and Jonny Bairstow were subjected to verbal barbs during the 4th Test at SCG. Photograph:( AFP )

Three unruly fans were evicted from the Sydney Cricket Ground (SCG) on Day 4 of the ongoing 4th Ashes Test on Saturday.

England batter Jonny Bairstow said it would have been nice if the supporters who abused him were still there after the stumps at Sydney Cricket Ground on Friday.

Three men were ejected from the stadium with no charges laid after the English pair of Ben Stokes and Bairstow were subjected to verbal barbs during the day three`s tea break of the ongoing 4th Ashes Test against Australia.

In the footage obtained by The Age and the Herald from a witness show the pair being ridiculed for their body shape by at least one fan as they headed up the steps to the dressing room in the Members Pavilion.

"Stokes, you`re fat," a fan said. "Take your jumper off, Bairstow, lose some weight Bairstow," the England batter was told.

Bairstow fired back with "Pal, that`s right just turn around and walk away," before three people were ejected from SCG.On day three, Bairstow brought up England`s first century of the series, though will have work to do tomorrow, batting with the tail to close the 158-run first-innings deficit. Ben Stokes scored 66 as the tourists will resume on 258/7 on day four.

Asked about his earlier exchange of verbals with a spectator, Bairstow after the day`s play replied: "It was a bit of bad-mouthing. It`s not needed. We`re out there trying to do our jobs, people are there enjoying the cricket. Unfortunately, sometimes people overstep the mark."

Also Read: 'You are allowed to fail': David Warner backs Virat Kohli to bounce back amid criticism over poor form

"I think it is important to stand up for ourselves because if we are not standing up for ourselves, you can cop it. When people overstep the mark, they need to be told. It`d have been nicer if we were there giving it when we walked off at the end, wouldn`t it? Unfortunately, they weren`t there at the end, they missed the end of a fantastic day of Test cricket," he added.

Notably, this incident comes one year after when India pacer Mohammed Siraj reported racial abuse at SCG. Six spectators were then removed from the ground on that occasion.