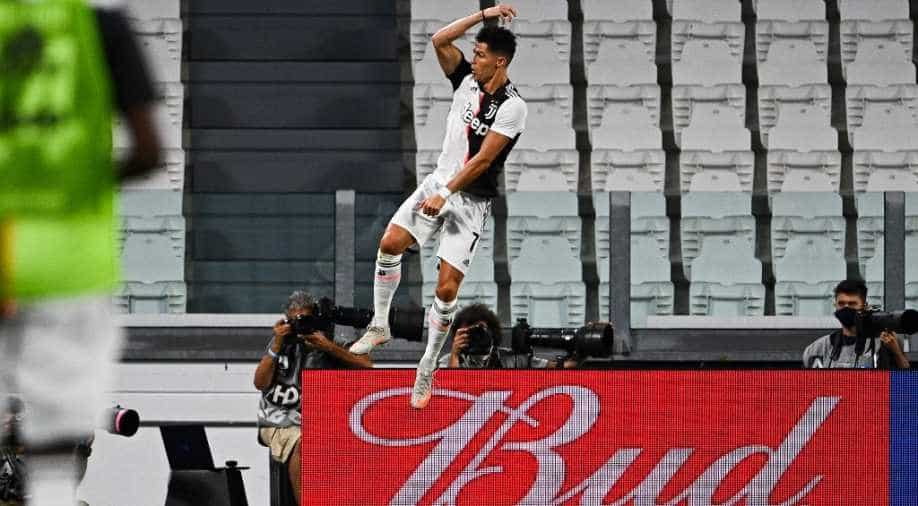 Cristiano Ronaldo hit back at his critics with a quick-fire hat-trick as Juventus brushed aside Cagliari 3-1 on Sunday, five days after their Champions League elimination, while Inter Milan moved nine points clear at the Serie A summit.

Cristiano Ronaldo hit back at his critics with a quick-fire hat-trick as Juventus brushed aside Cagliari 3-1 on Sunday, five days after their Champions League elimination, while Inter Milan moved nine points clear at the Serie A summit.

Portuguese star Ronaldo bore the brunt of the criticism for Juve's latest European flop after failing to score in either leg of the last-16 defeat by Porto, while also being partly at fault for what proved to be the winning goal.

But the 36-year-old scored a header after less than nine minutes at the Sardegna Arena, added a second from the penalty spot, and completed a 'perfect' treble on 32 minutes with a fine left-footed strike.

Defending champions Juventus are 10 points behind Inter Milan, who beat Torino 2-1 earlier Sunday, but with a game in hand.

Andrea Pirlo's side pulled just one point behind second-placed AC Milan, who host Napoli later Sunday, as they try to keep their push for a 10th consecutive Scudetto alive.

Ronaldo broke the deadlock early on, rising high to nod in a Juan Cuadrado corner.

But he could have been sent off after a quarter of an hour, receiving only a yellow card for dangerous play as his boot struck Cagliari goalkeeper Alessio Cragno in the face while attempting to meet a Federico Chiesa cross.

Ronaldo's second came from the penalty spot in the 24th minute after being brought down by Cragno.

He completed the 57th treble of his career when he collected Chiesa's pass and blasted a left-footed strike into the Cagliari net, at the only stadium in the Italian top flight where he had not previously scored.

Ronaldo is the leading scorer in Serie A with 23 goals this season, ahead of Inter's Romelu Lukaku, who has 19.

It was his third hat-trick for Juventus since joining in 2018, after also putting three past Cagliari in the league last season and in the Champions League against Atletico Madrid in 2019.

"It makes me laugh. I would never have imagined discussing the value of Cristiano Ronaldo," said Paratici.

"It's a privilege to have him with us, he's part of our future."

Cagliari, two points above the relegation zone, pulled a goal back through Giovanni Simeone in the 61st minute.

Lautaro Martinez scored a brilliant 85th-minute winner for Inter in a tight game against 18th-placed Torino.

Antonio Conte's Inter once again needed their strike duo of Lukaku and Martinez to find a way to win in Turin.

Christian Eriksen came off the bench on 56 minutes and had an immediate impact, playing a part in the move which resulted in Torino defender Armando Izzo fouling Martinez in the penalty area.

Lukaku fired home the resulting spot-kick in the 62nd minute.

But Martinez snatched the victory by getting his head to an Alexis Sanchez cross for his 14th league goal this term.

Inter stretched their winning run to eight matches to move further ahead of AC Milan.

"The three points were also vital for Torino who gave little away."

Injury-hit Roma dropped to fifth, two points behind Atalanta and the Champions League berths after falling 2-0 at 19th-placed Parma who earned their first win since November 30.

Hernani added a second from the spot in the second half to secure a valuable win which moves Parma a point behind Torino, who have played two games fewer because of a coronavirus outbreak, and three from safety.