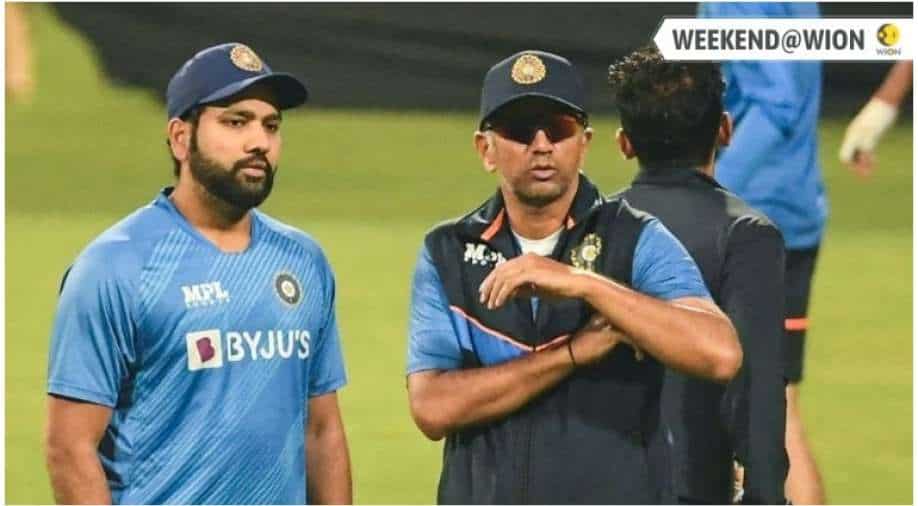 Surely, Dravid-Rohit pairing is off to a flier. The real test is still miles away but they are not backing out from acknowledging the past mistakes and are boldly setting up new ways going forward. Sit back and relax...The road will clearly have more hurdles and speed-breakers but this pair looks more suited to handle it all with a pragmatic and practical approach.

It wasn't quite a smooth transition in Indian cricket when Virat Kohli-Ravi Shastri-era came to an end, slowly making way for the Rohit Sharma-Rahul Dravid's alliance. When Kohli resigned as the T20I captain and Rohit was named his successor, the Indian cricket fans were in for a rollercoaster ride as many changed followed suit.

In late 2021, BCCI removed Kohli as the ODI captain, making Rohit the white-ball skipper. While it opened a pandora of box -- with the Kohli vs BCCI row gaining much limelight -- the dust seems to have settled down on the communication mishap between BCCI chief Sourav Ganguly-selection committee and the former captain. The changes in the leadership group, however, continued as Kohli also resigned as the Test captain in mid-January 2022.

At present, Rohit has become the all-format skipper with Dravid being in his shadow as the head coach. Amid the unnecessary chaos and negativity, India have been on a roll at home with a forgettable South Africa tour the only blip in between. However, things are now slowly starting to shape up and falling into places within the national team.

ALSO READ | He would give me important overs: Jasprit Bumrah reveals how Rohit Sharma helped in his growth

After their SA annihilation, Team India has been on a roll -- although in home conditions. Rohit-led India whitewashed West Indies in the home white-ball series and the hosts have already gained an unassailable lead in the ongoing three T20Is versus Sri Lanka.

With the SL series also in their grasp, Rohit-Dravid is yet to lose an international game as captain-coach. In fact, India are currently enjoying their longest unbeaten streak in the shortest format (11).

Thus, what is the duo doing right despite much chaos in their brief partnership? (If the BCCI vs Kohli row is now on the backburner, out-of-favour Wriddiman Saha's revelations on his communication with Dravid, Ganguly, etc. have also made a lot of noise)

In the recent past, Rohit-Dravid have spoken a lot on giving bio-bubble breaks to the players (currently enjoyed by Kohli, Md Shami, Rishabh Pant), role clarity and redeveloping a proper communication process (It is to be noted that despite the success enjoyed by Shastri-Kohli, their partnership highlighted communication gap between players and team management on several occasions: during M Vijay, Ambati Rayudu, Ajinkya Rahane's respective omissions, etc.).

Ahead of the SL T20Is, captain Rohit talked about being the team's plans of being flexible by relentlessly backing even their non-regular players ahead of the 2022 T20 World Cup. Rohit opined on Sanju Samson and told the reporters, "That guy has got talent, man. Whenever I have seen him bat in IPL and all of that, he has just produced an innings where everyone goes over the moon watching it. So he has got the skill set to succeed. That is the whole point about the sport. A lot of people have skill set, lot of people have talent but how you utilise them is the most critical par."

"His back-foot play is superb, some of the shots you must have seen during the IPL, the pick-up pull, the cut shots, standing and delivering over bowler’s head. Those kinds of shots are not easy to play and I believe when we go to Australia, you need those kind of shot-making ability and Samson does has it in him. I just hope that he utilises his potential to the maximum,” added Rohit.

(Sanju repaid the faith with a blistering 25-ball 39 in the second and penultimate encounter versus the Islanders).

Dropped but no way out of reckoning...

With Shreyas Iyer not making it to the playing XI in India's 1st T20I versus West Indies, Rohit made it clear that the batter remains a vital cog in the setup. "Someone like Shreyas Iyer is sitting out, very hard on him not making it to playing eleven, but we needed someone to bowl in the middle which is why we couldn't get him in. It's always nice with that kind of competition going around and a lot of the guys are missing out as well. I'm happy to have that kind of challenges rather than not having players available and not in form," he had told at the post-match presentation.

(Iyer is in rollicking form with two electrifying half-centuries in the SL T20Is).

Dravid welcomed the big question on Saha's Test omission -- without losing his cool -- and told the reporters after the WI T20Is, "I’m actually not hurt at all, because I have deep respect for Wridhhiman Saha and his achievements, his contribution to Indian cricket. My conversation with him actually came from that place. I think he deserved honesty and he deserved clarity. These are conversations I constantly have with players. I don’t expect players to always like messages or to agree with everything that I have to say about them. That’s not how it works."

Thus, the team is now slowly plugging the gaps which were previously present in the Indian team, under Kohli-Shastri.

Highlighting the same, Dinesh Karthik recently told the ICC, "The new captain and there's a new coach, I think they are taking the team in a fabulous direction. They've plugged small holes, which were probably there previously, and that has been the beautiful part about it. And along the way, in the journey, they've managed to become No.1."

Time and again, Rohit-Dravid have not shied away from stressing that they are preparing the team for the 2022 T20 WC, albeit with some tinkering in team combination and roles (In the previous captain-coach pairing, one eye was on the future but never openly declared in public; showcasing a rather confused mindset).

The current Indian team is slowly picking the lying pieces and moving ahead. The Men in Blue are trying to experiment with their template (which resulted in their first-round exit in the 2021 T20 WC), trying to balance out between youth and experienced campaigners, identifying new leaders, tinkering roles of different individuals to not increase their options but to broaden the horizons of the resources available.

ALSO READ | They were standing there for me: Ishan Kishan credits Rohit, Dravid for backing him despite poor form

After the WI home series, coach Dravid confirmed that the team management 'don't want to cast their net too wide'; to avoid confusion and irregularity in team selection. "There is no set time frame to freeze on a team. We don’t want to cast our net too wide but we also don’t want to just restrict ourselves to 15 players. By the time we get to the [T20] World Cup, we need to have a bunch of guys who have at least played 10-20 games," the former captain stated.

Surely, Dravid-Rohit pairing is off to a flier. The real test is still miles away but they are not backing out from acknowledging the past mistakes and are boldly setting up new ways going forward. Sit back and relax guys...The road will clearly have more hurdles and speed-breakers but the Rohit-Dravid looks more suited to handle it all with a pragmatic and practical approach.