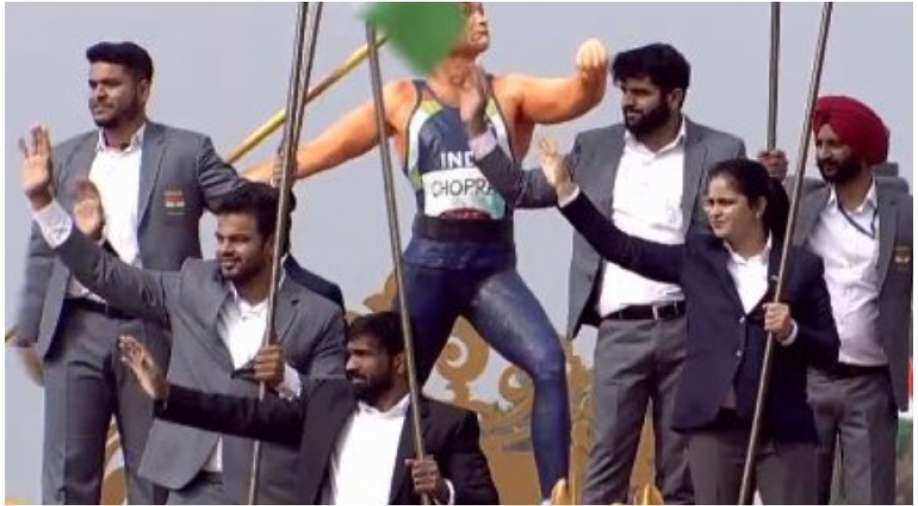 Out of the seven medals won by India in Tokyo Olympics 2020, Haryana bagged four medals, including the lone gold medal in the individual category.

The tableau of Haryana at the Republic Day parade on Wednesday displayed the proactive policies of the state government to promote the culture of sports in Haryana.

The number one state in sports, occupying only 1.3 per cent of the geographical area and accounting for 2.09 per cent of the population of the country, Haryana has brought monumental laurels by winning the maximum number of medals for the nation in several international sporting events, including the Olympic Games.

Out of the seven medals won by India in Tokyo Olympics 2020, Haryana bagged four medals, including the lone gold medal in the individual category. The Haryana government had awarded cash prizes of Rs 25.40 crore to the sportspersons of the state who participated in the Tokyo Olympics.

Similarly, in the Paralympics 2020, out of the total 19 medals won by the country, the players of Haryana got six medals, including two gold medals in the individual category.

The tableau reflects the proactive policies of the state government to promote the culture of sports.The chariot carried by horses is a symbol of "Victory", similar to the Victory Chariot of the Mahabharat War.

In the first part of the tableau, the Conch of Lord Krishan has been shown; the wrestlers wrestling in the arena above the middle of the tableau reflect the affection towards sports in Haryana. In the rear of the tableau, there are participants and winners in the national and international sports competitions, including the Olympics.

The tableau in the form of "Victory Chariot" is a symbol of honour and pride not only for Haryana but also for the whole country. India is celebrating its 73rd Republic Day today. A set of guidelines issued by the Centre states that those attending the Republic Day parade must be fully vaccinated against COVID-19 and children below 15 years of age will not be allowed to attend the function.

Visitors must carry proof of vaccination and must adhere to all COVID-protocols, such as wearing face masks and maintaining social distancing. As many as 21 tableaux including those 12 states and nine ministries or government departments are a part of the Republic Day parade.

The celebrations this year are special as Republic Day falls in the 75th year of Independence, being celebrated as `Azadi ka Amrit Mahotsav` across the country. To mark the occasion, the Ministry of Defence has conceptualised a series of new events during the main parade on Rajpath on January 26 and the `Beating the Retreat` ceremony at Vijay Chowk on January 29.

It has been decided that the Republic Day celebrations will now be week-long from January 23-30 every year. The celebrations commenced on January 23, the birth anniversary of great freedom fighter Netaji Subhas Chandra Bose and culminate on January, 30 which is observed as Martyrs` Day.