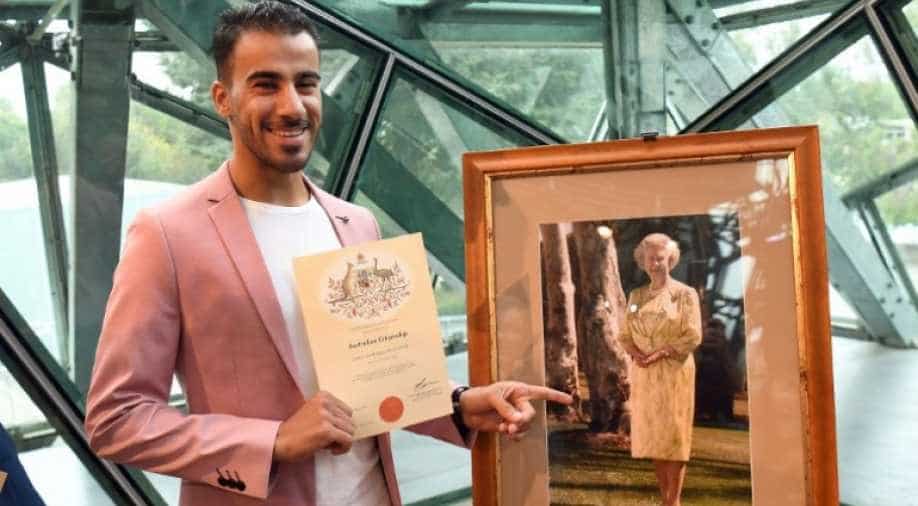 Hakeem al-Araibi, who was granted refugee status and residency in Australia in 2017 after fleeing Bahrain, poses with his Australian citizenship certificate and a photograph of Queen Elizabeth II. Photograph:( AFP )

Hakeem al-Araibi became an Australian at a ceremony in Melbourne.

A refugee footballer who was detained in Thailand and threatened with extradition to Bahrain said he feels sure "no one can follow me now," after becoming an Australian citizen on Tuesday.

Hakeem al-Araibi, who was granted refugee status and residency in Australia in 2017 after fleeing Bahrain, became an Australian at a ceremony in Melbourne.

The 25-year-old shot to international fame when he was arrested while on honeymoon in Thailand last year.

He was wanted by Bahrain on offences linked to the 2011 Arab Spring uprisings.

Amid a worldwide outcry, he was eventually allowed back to Melbourne, where he plays semi-professional football.

Spotting a big smile on his face and a salmon-pink jacket, al-Araibi posed for photos with Prime Minister Scott Morrison and Foreign Minister Marise Payne after the ceremony at Federation Square in Melbourne.

"I am very grateful to you, now I feel save. NSydneyo one can follow me now," al-Araibi wrote on Twitter Tuesday.

"It's a wonderful and awesome feeling to gain all this respect in my citizenship ceremony, I'm really proud to see Marise Payne... and other government representatives participating in my ceremony it make me feel secure."

Payne told the ceremony the massive outpouring of support for the footballer "played an enormous part in ensuring he was returned to Australia".