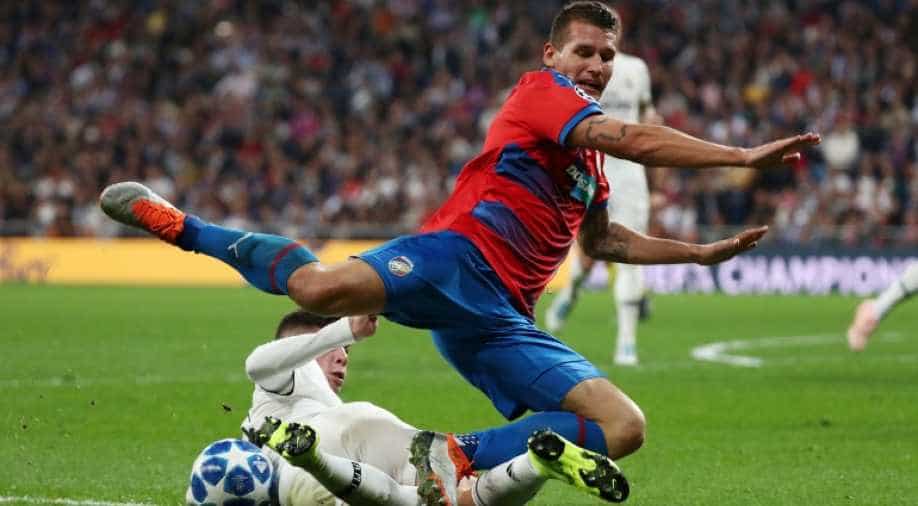 Madrid snapped a run of five games without victory by earning a 2-1 win at home to Viktoria Plzen.

Real Madrid snapped a run of five games without victory by earning a 2-1 win at home to Viktoria Plzen in the Champions League on Tuesday yet were still booed off the pitch by their own supporters after an unconvincing performance.

Karim Benzema headed the stuttering triple European champions ahead early in the first half but they were fortunate not to concede an equaliser before the break as the Czechs somehow failed to capitalise on three clear opportunities.

Brazilian left-back Marcelo got Real's second goal with a coolly-taken dinked finish in the 55th minute and they then missed a glut of chances to extend the lead, which was cut by an ice-cool finish from Plzen's Patrik Hrosovsky in the 78th.

Real held on for a far-from-convincing win which keeps them level with Group G leaders AS Roma on six points after three games but failed to answer serious questions about their form ahead of Sunday's 'Clasico' away to arch-rivals Barcelona.

"We all needed to get a victory today which we deserved to get before," said under-pressure Real coach Julen Lopetegui.

"I can't say whether the crisis is over or not. All I can say is we had gone a lot of games without winning and it was vital we won. Points give you tranquillity and we have broken a spell of not winning. Now we have to kick on."

A run of five games without a win culminating in Saturday's shock 2-1 home defeat by Levante had left Lopetegui against the ropes and he faced repeated questions about his precarious position in the build-up to the game.

The former Spain manager had insisted he felt able to continue at the helm in Madrid yet could still not give any guarantees that he would remain in charge by the weekend.

Benzema's headed goal from a superb cross by Lucas Vazquez brought a sense of calm to a nervy Santiago Bernabeu crowd although there were howling whistles at halftime after Real had given up a third chance to the Czechs but got away with it.

The visitors had missed an early opportunity when Milan Petrzela was denied at the near post by goalkeeper Keylor Navas and then managed to send the rebound wide.

David Limbersky failed to hit the target after getting past Lucas Vazquez and Hrosovsky then missed an even easier opening before the break when Navas flapped but the midfielder lacked composure and sent the ball over the bar.

Real's Uruguayan youngster Federico Valverde gave the home side a huge lift moments after coming off the bench to make his debut, winning possession and finding Gareth Bale whose backheel helped the ball to Marcelo who calmly converted.

Real captain Sergio Ramos came close to scoring as the hosts sought a third goal to wrap up the points but instead had to see the game out after Hrosovsky made amends for his earlier miss.

The final whistle provided little relief to the edgy home supporters, who let out a cacophony of boos and whistles despite Real winning for the first time in over a month.

"This result will give us confidence, we know we're not playing well at the moment but we've got three points and now we can focus on Barcelona," said Real midfielder Casemiro.

"We have to be honest and say we are not playing well and are on a bad run but we have total confidence in the squad and the coach."