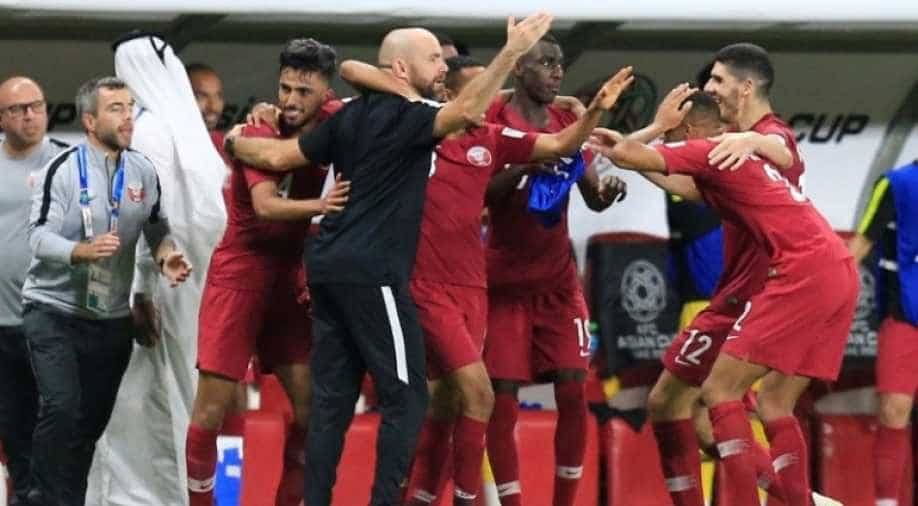 Boualem Khoukhi's early strike and an eighth goal of the tournament from striker Almoez Ali gave Qatar a 2-0 halftime lead with Hassan Al-Haydos and Hamid Ismail completing the rout in the last 10 minutes.

Qatar defied sandal-throwing local fans to storm into the Asian Cup final for the first time with a 4-0 win over hosts United Arab Emirates on Tuesday, setting up a decider against Japan in Abu Dhabi on Friday.

Boualem Khoukhi's early strike and an eighth goal of the tournament from striker Almoez Ali gave Qatar a 2-0 halftime lead with Hassan Al-Haydos and Hamid Ismail completing the rout in the last 10 minutes.

The UAE had been hoping to reach the Asian Cup final for the second time, but instead look likely to face sanctions after Ali was pelted with footwear as he celebrated his goal and the last two goalscorers were also the target of missiles.

"I think the players were aware that it was going to be tough with the crowd but I think they controlled their emotions very well," said Qatar coach Felix Sanchez.

"It was difficult for the players, it's normal in a semi-final to celebrate, and I think it was only a few people who behaved in a not proper way, most were fair.

The cloud of the diplomatic and trade boycott of Qatar that Saudi Arabia, the UAE, Bahrain and Egypt launched in 2017 hung heavy over the stadium with the visitors' national anthem booed by the majority of the crowd of 38,646.

The crowd were stunned into silence in the 22nd minute, though, when Khoukhi cantered into the UAE half on the break and launched a speculative shot towards goal from the corner of the area that slipped under the hands of goalkeeper Khalid Eisa.

While Eisa should have stopped the first goal, there was little he could have done about the second 15 minutes later.

Ali powered his way through a trio of static defenders on the left edge of the box and curled his shot into the net off the far post to extend his lead as the tournament's top scorer, eliciting a shower of sandals thrown by irate home fans.

The hosts poured forward after the break and striker Ali Mabkhout revived their hopes with a long-range drive in the 52nd minute that Qatar goalkeeper Saad Al Sheeb tipped over the bar.

UAE captain Ismail Matar came on as a substitute and had a shot blocked in the 69th minute, while Saad was again a match for a looping Ahmed Khalil header.

The breakthrough would not come, though, and captain Haydos scored the third on the break for the visitors with a neat chip over Eisa to attract a shower of drinks bottles.

Insult was added to indignity in stoppage time when UAE defender Ismail Ahmed was sent off after a VAR review for an elbow to the face of Salem Al-Hajri before Hamid Ismail beat Eisa for the fourth time to trigger another barrage of bottles.

"I apologise to the fans for the result. We tried our best," said UAE coach Alberto Zaccheroni, whose contract came to an end with the defeat.

"We kept trying but we have to admit the Qatar team were the better team tonight."