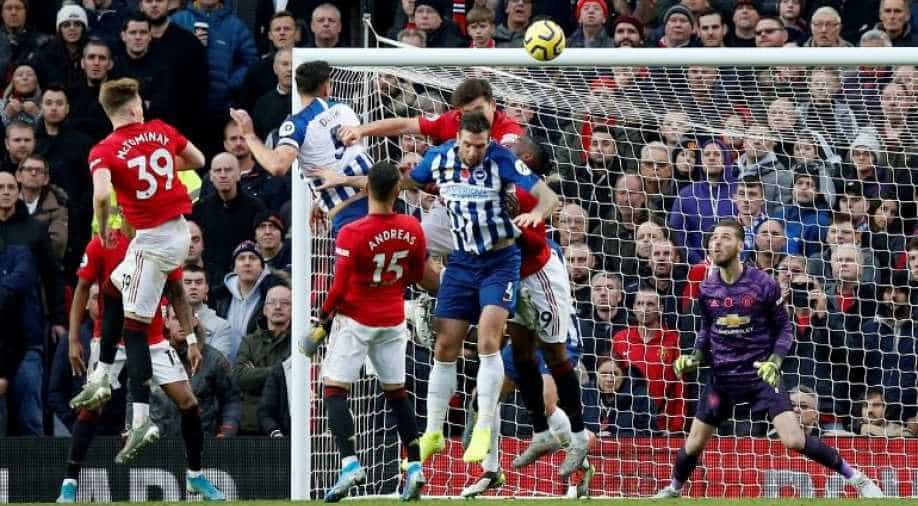 United climbed to seventh place on 16 points from 12 games after stretching their unbeaten home run against the Seagulls to 12 matches in all competitions.

Manchester United climbed back into the top half of the Premier League table on Sunday, as goals from Andreas Pereira and Marcus Rashford and an own goal from Davy Propper gave the side a 3-1 home win over Brighton and Hove Albion.

United climbed to seventh place on 16 points from 12 games after stretching their unbeaten home run against the Seagulls to 12 matches in all competitions. Brighton slipped to 11th place on 15 points.

The home side benefited from a fine individual display by Anthony Martial, who set up two goals and ran tirelessly at Brighton's defenders.

"Anthony Martial did not get a goal but he was outstanding," Solskjaer told the BBC.

"Brandon Williams was excellent too, he has had some good games already and he seems he wants to be out there and enjoy himself.

"We should have scored many more goals. It was an excellent performance from the lads, when you see them going forward it is a joy to watch."

Pereira fired United ahead in the 17th minute with a fortuitous goal, as his shot from inside the penalty area took a heavy deflection off Dale Stephens and left Brighton goalkeeper Mathew Ryan stranded.

Pereira initially lost control of the ball as he raced forward before Martial unselfishly teed up the rebound for the Brazilian to hit a left-foot shot.

Propper then bundled the ball into his own net two minutes later as an inswinging free kick from Fred caused havoc in Brighton's six-yard box. The goal was awarded after a VAR check.

Lewis Dunk pulled one back for Brighton in the 64th minute with a close-range header, but Rashford restored United's two-goal advantage two minutes later when he blasted in a shot from 12 metres off the underside of the bar.

Again the goal resulted from good work by Martial, who beat a defender and Ryan to the ball before squaring it back for Rashford from a tight angle.

United missed several chances in the closing stages to win by a bigger margin, with Rashford guilty of two glaring misses while Ryan pulled off some superb saves.

The match ended on a sour note for United midfielder Scott McTominay, who limped off injured moments before the final whistle after an innocuous-looking duel.