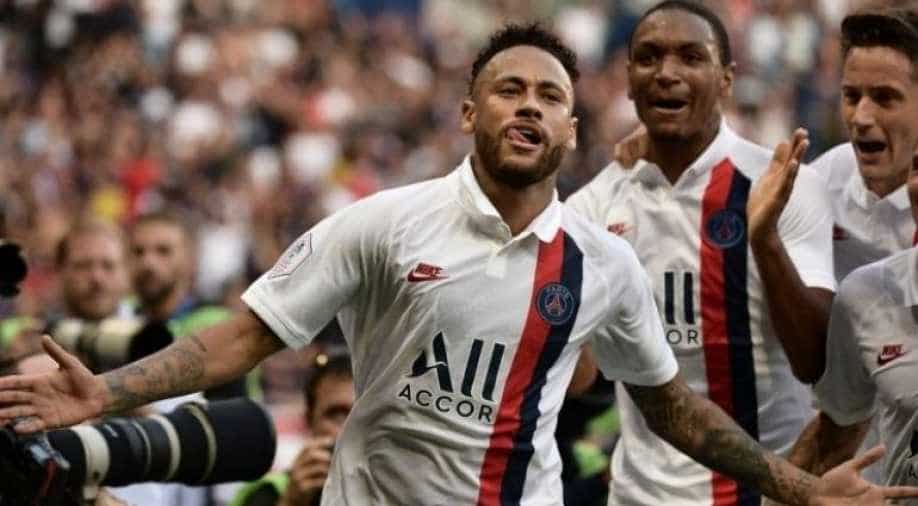 Neymar shrugged off a hostile reception as he marked his return to action for Paris Saint-Germain with a stunning injury-time winner on Saturday, and then insisted it was time to move on from the saga of his aborted return to Barcelona.

The world's most expensive player was booed and insulted by sections of the PSG support in the Ligue 1 match against Strasbourg at the Parc des Princes.

That seemed set to be the only story of the afternoon until the second minute of added time when, with the game still goalless, the Brazilian met Abdou Diallo's cross with an acrobatic effort that sent the ball arcing back over his own head and in off the post, sealing a 1-0 win.

It was a remarkable goal and a reminder of why PSG paid a world record 222 million euros ($264 million at the time) to sign Neymar in 2017. It also leaves them two points clear of Rennes at the top of Ligue 1.

"I made it clear that I have nothing against the fans, nothing against Paris Saint-Germain as a club. Everyone knows I wanted to leave. I am not going to get into the details of what happened," he said after the game.

"It is time to turn the page. Today I am a Paris Saint-Germain player and I am going to give everything on the field."

He had not played for his club since May and had been left on the sidelines in their first four league games of the campaign because of the uncertainty surrounding his future.

However, having been resigned to a third season in France, he was handed a start by coach Thomas Tuchel here, and loud jeers greeted his name as the teams were read out. He was also regularly whistled by fans when he touched the ball.

"It is not the first time I have been booed by everyone," Neymar admitted.

"It is sad but I know that, from now on, every game I play will be an away game."

One banner unfurled in Portuguese, aimed at Neymar's father who is also his agent, read: "Neymar Senior, sell your son in the Vila Mimosa".

Vila Mimosa is a district of Rio de Janeiro notorious for prostitution.

Certainly not much was going right on the field for the 27-year-old or for his team, who had been held by Strasbourg twice in the league last season.

Neymar hit the post direct from a corner late on but ended up getting his revenge -- it was against Strasbourg that he suffered a broken foot back in January.

"It was not easy because he is a very sensitive kid," Tuchel said. "It wasn't easy for the supporters either during the transfer window, so we have to accept their reaction. He can play better but he needs several matches to get his rhythm back."

As brilliant as the goal was, it was not met with unanimous approval by supporters, but Neymar will clearly be missed when he sits out Wednesday's Champions League opener against Real Madrid due to suspension.

PSG were still without the injured Kylian Mbappe and Edinson Cavani here, but Mauro Icardi appeared as a substitute after arriving on loan from Inter Milan just before the transfer deadline.

New goalkeeper Keylor Navas started in goal following his arrival from Real and excelled himself with one early save from Ludovic Ajorque.

Lamine Kone headed over for the visitors late in the first half, and it was not until the latter stages that the hosts began to apply concerted pressure.

Neymar burst through in the 76th minute only to be denied by Matz Sels, and Strasbourg's Belgian goalkeeper then made a stunning save to tip Ander Herrera's deflected effort around the post.

There was nothing Sels could do, however, when Neymar produced his moment of magic at the death.