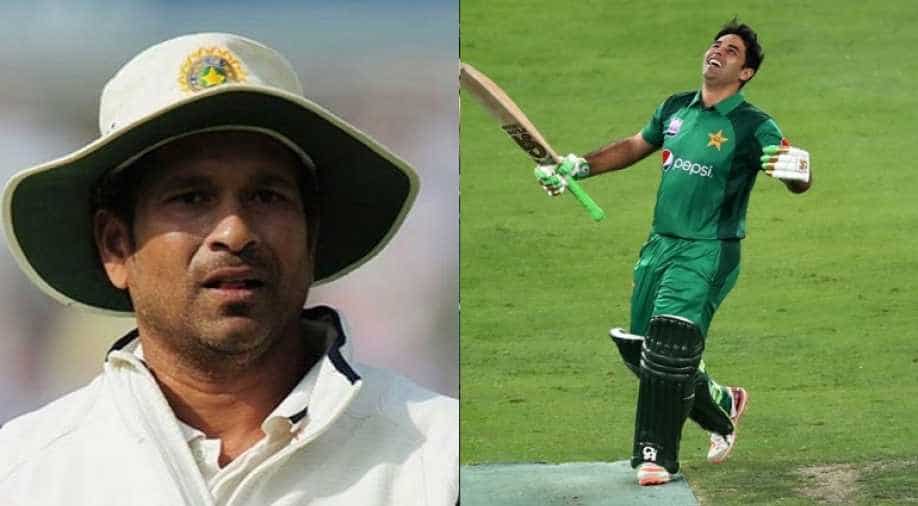 "It will be the best day in my life when I meet him (Tendulkar) because he was one of the best batsmen," said Abid

Pakistan's newly selected opener Abid Ali on Sunday expressed confidence that despite strained political relations India's legendary batsman Sachin Tendulkar will give him a hug and a few batting tips at next month's World Cup.

The 31-year old has been a prolific run scorer in Pakistan's domestic cricket and broke into the national one-day squad for the World Cup after smashing a century on his debut against Australia in Dubai last month.

Abid is almost the same height as Tendulkar and bats in a similar style, but has a long way to match the Indian maestro's phenomenal record of most Test runs (15,921), most one-day runs (18,426), most Test hundreds (51) and most one-day centuries (49) to name a few.

"It's my wish and hope that I meet Sachin Tendulkar," Abid told a group of journalists.

"I am sure that if I want to get any information on cricket from Sachin, he will give a positive reply."

Abid said it will be a memorable day when he meets his idol.

"It will be the best day in my life when I meet him (Tendulkar) because he was one of the best batsmen.

"West Indian Viv Richards was also a great so I want to meet all the great players and learn from them," said Abid.

Tension between India and Pakistan rose to a near-war level since February 14 militant attacks on Indian side of Kashmir which left 44 army personnel killed.

India claimed it responded with an attack on a militant base in Balakot in the Pakistan side of Kashmir which was followed by Pakistan shutting down its airspace and later shooting down two Indian air force planes, capturing a pilot.

The Indian pilot was later released as a sign of goodwill and peace.

There were calls that India should not play the 2019 World Cup match with Pakistan scheduled for Manchester on June 16.

Despite the bitterness, players from both sides enjoy cordial relations.

Indian captain Virat Kohli presented his bat to Pakistan's fast bowler Mohammad Amir during the World Twenty20 in India three years ago as a sign of appreciation of his talent.

Abid said he had followed Tendulkar's batting style from his early days.

"Actually I have followed Sachin's technique from day one of my career and after watching him I tried to play like him. He was a great player, just like our own Inzamam-ul-Haq and Mohammad Yousuf.

"I adopt their good things and leave any bad thing. If I meet him I will try to talk to him and get some advice, mentally and technically, so that it helps me improve my batting."

Abid said he will do his best to be known as a good batsman.

"Tendulkar's record is awesome," said Abid of the Indian master who retired in 2013.