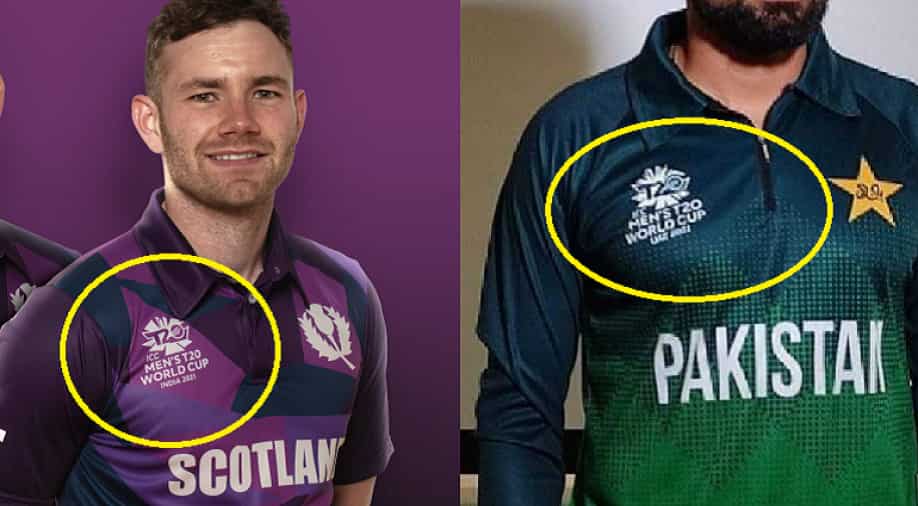 In a picture that has gone viral on social media, Pakistan captain Babar Azam can be seen sporting a jersey with 'UAE 2021' written on it instead of 'India 2021' for the upcoming T20 World Cup.

Pakistan cricket team has sparked controversy yet again by sporting 'UAE 2021' instead of 'India 2021' on their team jersey for the upcoming T20 World Cup 2021. In a picture that has gone viral on social media, Pakistan skipper Babar Azam can be seen wearing his country's allegedly leaked T20 World Cup jersey with 'UAE 2021' written on it.

The picture has irked several Indian fans, who pointed out that jerseys of all other countries have 'India 2021' written on their shirts. Several countries have already released their official jersey for the T20 World Cup 2021 while others are yet to reveal their outfits for the showpiece event. The likes of Scotland and others have 'India 2021' printed on their T20 World Cup jersey.

While the Pakistan Cricket Board (PCB) has not officially released the jersey of the national team yet, the leaked picture is doing the rounds on social media and has been shared by a number of fans. "ICC Men's T20 World Cup UAE 2021", reads the top right of the jersey worn by Pakistan skipper Babar in the picture.

Check out the leaked image:

The T20 World Cup 2021 was originally scheduled to be played in India. However, due to COVID-19, the tournament has been shifted to the UAE keeping the players and others safety in mind. The Board of Control for Cricket in India (BCCI) remains the recognised host for the tournament in UAE.

The action from the Pakistan Cricket Board has left many irked on social media and can also draw the ire of BCCI and ICC if they decide to go ahead with the same jersey in the World Cup. It remains to be seen if Pakistan will change 'UAE 2021' to 'India 2021' when they make their new jersey official.

Pakistan will be up against arch-rivals India in their opening clash of T20 World Cup 2021. The high-octane encounter will be staged at the Dubai International Stadium in Dubai on October 24.

Disclaimer: The article has been churned out on the basis of publically available information. WION does not take responsibility for this claim.