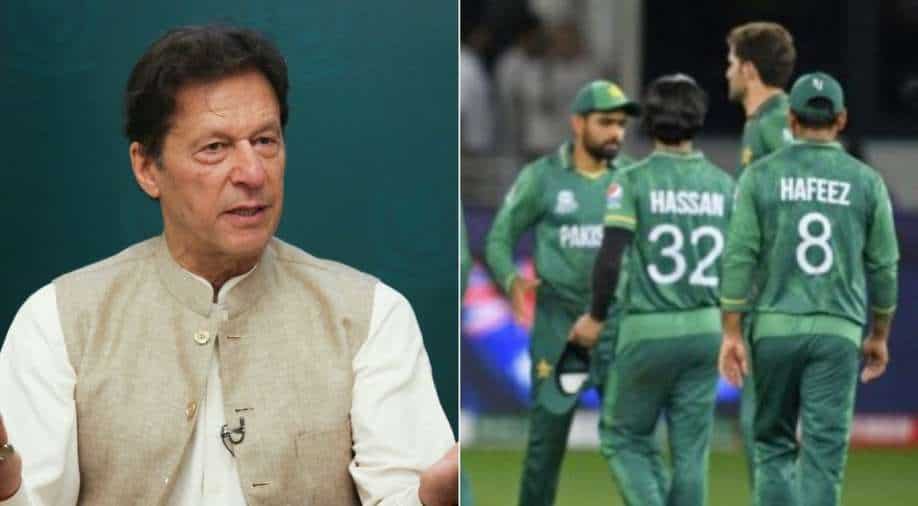 Pakistan PM Imran Khan said that he is proud of the "quality of cricket" Babar Azam & Co. has played and also praised their humility

Pakistan's Prime Minister Imran Khan shared a message of consolation for Babar Azam & Co. after the Pakistan team crashed out of the ICC Men's T20 World Cup post their five-wicket defeat against a gritty Australia in the second semi-final at Dubai International Cricket Stadium. Aaron Finch-led Australia will meet New Zealand in the title clash, scheduled for Sunday (November 14).

The cricketer-turned-politician said that he knows how all the players must have been feeling right now as he has faced disappointments on the cricket field, similar to this.

However, the Prime Minister also added that he is proud of the "quality of cricket" the team played with and praised the "humility" the team showed after winning the games in the group stage in the leadership of Babar Azam.

The Men In Green had reached the semi-final with a perfect record as they won all of their matches of Super 12 stage, finishing at the top in Group 2.

To Babar Azam & the team: I know exactly how all of you are feeling right now bec I have faced similar disappointments on the cricket field. But you shd all be proud of the quality of cricket you played & the humility you showed in your wins. Congratulations Team Australia.

In the semi-final clash on Thursday (November 11), Pakistan were put in to bat first as they posted a competitive total of 176 for a loss of four wickets in 20 overs.

For Pakistan, the openers Mohammad Rizwan (67) and Babar (39) played crucial innings to help their side to put up an imposing target. Fakhar Zaman's unbeaten 55 was also vital.

Adam Zampa emerged as the most economical in the Australian bowling unit as he took one crucial wicket of Babar and gave 22 runs in his four-over spell. Mitchell Starc got Rizwan and Shoaib Malik's wickets. Pat Cummins dismissed Asif Ali.

In reply, the Australian team chased down the target with an over spare despite having a shaky start. Australia were in trouble when they were at 96-5 after losing all-rounder Glenn Maxwell's wicket. The team was pinning their hopes on Maxwell but he returned to the pavilion after scoring seven off 10 balls.

Opener David Warner (49) and Mitchell Marsh (28) played important innings, however, it was Marcus Stoinis (40) and Matthew Wade (41), who made the difference, playing in a pressure situation.

The unbeaten batters, Stoinis and Wade, displayed a feast of sixers to reduce the required run rate. Australia needed 20 runs off the last 10 balls when Wade smashed three back-to-back sixers to seal the deal.