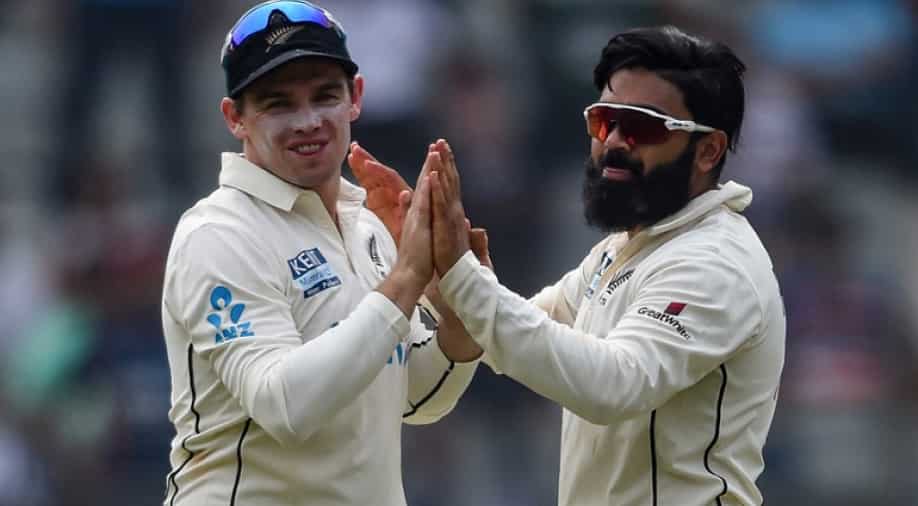 Ajaz Patel became the third bowler in Test history to claim all ten wickets in an innings. Photograph:( AFP )

New Zealand spinner Ajaz Patel created history as he became the third bowler in the history of Test cricket to pick up all ten wickets in an innings. Patel scripted the feat in India's first innings of the ongoing Mumbai Test.

Patel had drawn the first blood for New Zealand after a delayed start on Day 1 of the Mumbai Test when he dismissed Indian opener Shubman Gill on 44. The left-arm spinner then sent back Cheteshwar Pujara (0) and Virat Kohli (0) in quick succession while ensuring the duo failed to even open their account in the game. He then got rid of Shreyas Iyer on 18 as India posted 221/4 at stumps on Day 1.

Patel continued his magical spell on Day 2 of the Mumbai Test on Saturday and ran through the Indian batting line-up, picking up the remaining six wickets. He accounted for the dismissals of Mayank Agarwal, Wriddhiman Saha, R Ashwin, Axar Patel, Jayant Yadav and Mohammed Siraj to complete a historic ten-wicket haul and etch his name in history.

While Patel single-handedly picked up all ten wickets against India, Mayank Agarwal played a brilliant knock to help the hosts post a strong total of 325 runs on the board in their first innings. Mayank notched up 150 runs laced with 17 fours and 4 sixes and combined with the likes of Gill (44), Iyer (18) and Saha (27) to post crucial stands for Team India.

With the help of his heroic knock, the hosts managed to resist the pressure despite losing wickets in quick succession on Day 1. However, Mayank's efforts were outshone by Patel's historic ten-wicket haul. New Zealand would now be hoping to overhaul India's total of 325 runs in their first innings.